As a jazz pianist and composer, Eckemoff retains a classical sensibility in her precise touch and in her systematic, refined, orderly forms. --JazzTimes 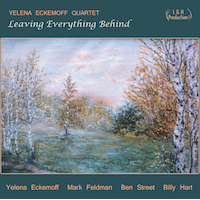 slideshow
Yelena Eckemoff, the prolific and enthralling pianist and composer, has earned plaudits for her recent releases Everblue, Lions, A Touch of Radiance, Glass Song and more. She has made high-level original music with sidemen on the order of Peter Erskine, Arild Andersen, Jon Christensen, George Mraz, and Mark Turner. With her new release Leaving Everything Behind, she deepens her multifaceted body of work by drawing on older original material- a few pieces dating as far back as the 1980s. “To emphasize my concept behind this album, I needed to go back to my roots," says the pianist. “I wanted to draw on music I composed when I knew very little- if anything at all- about the modern jazz field."

These compositions, in various ways, recall for Eckemoff deeply personal events and contemplations. Yet in reinventing her own works so thoroughly and imaginatively, Eckemoff looks back to look forward, approaching her older material from the heights of her acquired skills as a jazz pianist and band leader. Inhabiting “that rarefied area between modern classical chamber music and progressive jazz" (All About Jazz), Eckemoff once again enlists legendary drummer Billy Hart, whose expressive capacities and timbral choices give the music an unstinting freshness. Completing the lineup is sought-after bassist Ben Street and seasoned violinist and improviser Mark Feldman.

Eckemoff's album title, Leaving Everything Behind, was inspired by her departure from the crumbling Soviet Union in 1991. Having trained extensively as a classical pianist at the Moscow State Conservatory, Eckemoff showed a strong desire to cross musical boundaries and create her own unique oeuvre. “When my husband and I came to America it was a really difficult time," she recalls. “We came to America with less than twenty dollars in our pocket, didn't know the language, we were struggling to get established. Listening to music was not a priority, but I did a lot of composing and performing as a solo pianist."

The hardest thing by far, however, was leaving behind three small boys. “It was really impossible for us to leave Russia," says the pianist, “so we had to leave our children with my parents for a year and two months just come to America together. It was the most difficult thing we ever did. We didn't know if we'd have to go back or if they would be brought to us. It was indefinite- we didn't know how long we weren't going to see them."

Eckemoff confronts these memories and others in a series of poems that accompany each of the tracks on Leaving Everything Behind (a practice she began on Glass Song from 2012). The cover art and all interior drawings are also Eckemoff's- in fact the front cover artwork dates back to the time when she composed the music. “I am a professional musician, and painting and poetry for me has always been just a hobby. But I believe that including my own poetry and paintings into the album package gives people an opportunity to connect with my music on a deeper, more personal level. Also, I think it's important in the age of streaming to offer people a comprehensive physical object, a fuller experience of art."

There is a strong through-composed element in Eckemoff's music, yet her melding of complex written material with a flowing, elastic sense of rhythm is what gives her efforts, Leaving Everything Behind included, an improvisational and even playful feeling. Of the eleven pieces, “Mushroom Rain," “Leaving Everything Behind" and “Hope Lives Eternal" were composed when Eckemoff was in her early 20s. “Ocean of Pines," an intricate piece with waltz, 4/4 and rubato sections and a haunting, elusive harmonic character, was composed in 2005, while six remaining pieces stem from a fruitful period in 2008.

There is a magnificent texture of the quartet and the transparent beauty of these four unique instrumental voices is immediately apparent on “Prologue," which leads to the darker, more rhythmically emphatic “Rising From Within." Other highlights include the contrapuntal dancing of Eckemoff and Feldman on “Spots of Light," the Billy Hart-driven groove of “Love Train" (not to be confused with the O'Jays hit), the lilting quasi-shuffle feel and poignant lyricism of “Tears of Tenderness" and the stately 3/4 pulse and soaring Feldman solo that enlivens “A Date in Paradise."

Eckemoff, who also produces all her albums, elaborates on her methods: “Traditionally, jazz is about extensive improvising on what might even be a simple tune. What I'm doing is taking more charge of the outcome. I provide a comprehensive, carefully thought-through musical framework, based on the important melodic material, and share with performers my sentiments about what each piece is meant to express. At the same time I leave much space in this framework for the creative reading by each band member, as well as the band as a whole. When we start playing together, each band member brings a personal interpretation of the music material, and sometimes the outcome evolves away from what was initially intended. The improvisational parts, both structured and free, add a strong element of unpredictability, and also the interplay between band members often takes the music in a new direction."

Yelena says about great Billy Hart, “He really understands where I'm coming from, and he was a first one to describe my approach to composition as 'pioneering the ground of making jazz an American classical music.' Also, Billy likes the task of expressing things through his drumming. He always wants me to tell him what I want to express: he loves this challenge, and when he plays, he always gives himself to the music completely." The story behind “Coffee and Thunderstorm" makes Eckemoff laugh: “At first I named it 'Fresh Air and Coffee,' and that's how I sent it to Billy. But then I renamed it because it was much more turbulent and my title didn't fit. Billy didn't know, so when we were playing it I said to him, 'Can you play something more like a thunderstorm?' He said, 'Oh, but I was trying to express fresh air!' 'Well, I changed my mind!' And then he was all thunderstorm.'"

While Leaving Everything Behind tells a story that is inescapably Eckemoff's own, her poem accompanying the title track, which mentions the Israelites leaving Egypt, hints at what appears to be a deeper message. “They could not take with them all their possessions. They should have taken a lot, though, to start from scratch in a new land. Yet I cannot stop thinking about all that they left behind... And I wonder if they had not left at all, that their essence, after thousands of years, still lingers there, in Egypt."