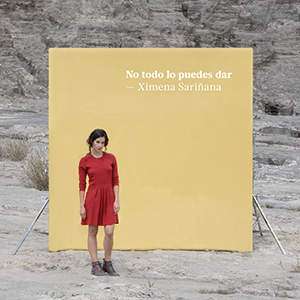 Even though she is still just 29, Ximena Sariñana is a remarkably mature artist. With her debut album, Mediocre (2008), she not only became one of the most acclaimed and popular artists in Latin music, but crossed over into the mainstream U.S. market, garnering a GRAMMY nomination and praise from Rolling Stone, Billboard, The New York Times, The Los Angeles Times, KCRW, NPR and many others. Responding to the extraordinary embrace of Sariñana’s music by non-Spanish- speaking audiences, Warner Brothers released a mostly-in-English self-titled album to acclaim in 2011. Now comes No todo lo puedes dar (Not All Can Be Given), the fullest realization to date of Sariñana’s unique artistry. Warner Music Latina releases a deluxe edition of the album, which is mostly written and produced by Sariñana, April 14, 2015. This summer, she’ll support Juanes on a U.S. tour. A full itinerary is below.

Recorded in Los Angeles and Mexico City, No todo lo puedes dar is at once more personal and more expansive than Sariñana’s previous albums. The new songs, many of which were co-composed by Juan Manuel Torreblanca, chronicle a breakup and a process of self- rediscovery, and also find Sariñana taking in new sounds. Throughout the 13-track disc, she adds more experimental and electronic flourishes to songs in which Sariñana continues to refine her craft as a pop songwriter. The album’s first single, “Sin ti no puede estar tan mal," perfectly reveals the new sound. The song’s official music video, directed by Ximena’s brother Sebastian Sariñana, has reached almost one million views on YouTube.

Sariñana was already highly accomplished when, at 22, she released Mediocre. She grew up in a family of filmmakers, including her father, the celebrated director Fernando Sariñana, and her mother, the screenwriter/producer Carolina Rivera. Sariñana made her first serious forays as a singer at the age of 14, in the film Amar Te Duele. Aside from her role in the film, her band Feliz No Cumpleaños (Happy Un-birthday) had a hit with a song on the movie’s best-selling soundtrack. She received her musical training at Berklee. Before Sei Track International/Warner Music Latina released Mediocre in the U.S., the album achieved a level of success in Mexico that was unprecedented for a new artist: it debuted at the top of the albums chart and remained there for five weeks, and was ultimately certified Platinum.

In writing about Mediocre, critics were already noting the grown-up sensibility and appeal of Sariñana’s music, while also recognizing her as a unique, fresh voice. Jon Pareles wrote in The New York Times that “her music [isn’t] kid stuff. Her voice mixes a reedy, brooding streak—akin to Fiona Apple’s and Édith Piaf’s—with touches of Brazilian insouciance and jazz scat singing.” Rolling Stone proclaimed Mediocre “one of the strongest debuts from a female singer-songwriter since Norah Jones’ Come Away With Me.” The Los Angeles Times called Sariñana “a perfect exponent for her generation” and “the change we’ve been waiting for.”

To record and support 2011’s Ximena Sariñana, the artist moved to Los Angeles and incorporated an even broader range of sounds, collaborating with producer Greg Kurstin (Lily Allen, The Bird and the Bee) as well as TV on the Radio’s Dave Sitek, Tim Armstrong of Rancid, and Diplo. In a New York Times Sunday Arts & Leisure profile, Jon Pareles wrote that the album “doesn’t sound like a committee project,” adding, “While electronics buzz and gurgle around her and vocal choruses unfurl out of nowhere, the ambience still feels human and handmade. And within the whimsical constructions of the songs is a voice filled not only with yearning and uncertainties but also with the confidence to air them.”