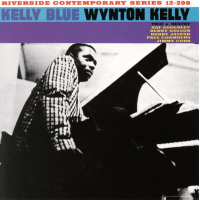 slideshow
Pianist Wynton Kelly had a soulful, swinging immediacy about his playing. Best known for his recordings with Miles Davis in 1957 and on Freddie Freeloader for Kind of Blue in 1959, Kelly went out on his own in 1963 with a trio at exactly the wrong time. Album opportunities were drying up and along with club audiences as older jazz fans preferred to stay home and younger ones were gravitating toward pop and soul. Kelly struggled financially throughout the 1960s, and his epilepsy and heavy drinking didn't help.

One of his finest albums was Kelly Blue, recorded for Riverside in February and March 1959, which sandwiched his March 2nd Freddie Freeloader recording for Kind of Blue.

The album was divided into two configurations—a sextet session recorded in February and trio in March. The sextet featured a fascinating mix of artists: Nat Adderley (cnt), Bobby Jaspar (fl), Benny Golson (ts), Wynton Kelly (p), Paul Chambers (b) and Jimmy Cobb (d). With Kelly at the center of the action with his airy blues and chord voicings, the other artists spin around him. Nat's tender trumpet, Jaspar's warm flute and Benny's smoky tenor saxophone provide a terrific combination of subtle textures. The slinky Kelly Blue and driving Keep It Movin', based on the chord changes to Autumn Leaves, are the two sextet features and are as elegant as can be.

The trio tracks include On Green Dolphin Street, Willow Weep for Me, Old Clothes and Do Nothin' Till You Hear From Me. On Green Dolphin Street is very hip, since it gives us a chance to hear what Kelly might have done on the Miles Davis recording in 1958 instead of Bill Evans. Willow Weep for Me is saturated in the blues—with Kelly leaving plenty of space, a hallmark of his playing style. Old Clothes is a blues by Kelly, and Duke Ellington's Do Nothin' Till You Hear From Me is taken as a walking mid-tempo blues. Softly as in a Morning Sunrise is one of the finest jazz interpretations of the song that I can think of.

Hats off to the late Orrin Keepnews for producing this one.

JazzWax tracks: You'll find Wynton Kelly's Kelly Blue(Riverside) here. If you want to buy the CD, look around on Amazon at the imports, which have a later release date.

Here's Softly as in a Morning Sunrise...