'I come from a family of inventors,' says the St. Louis-based artist. 'In my household growing up, there was always this freedom to go your own way, so I thought, Why not build an instrument? Why not be a guitar player, but play Indian music?' That is just what I did. 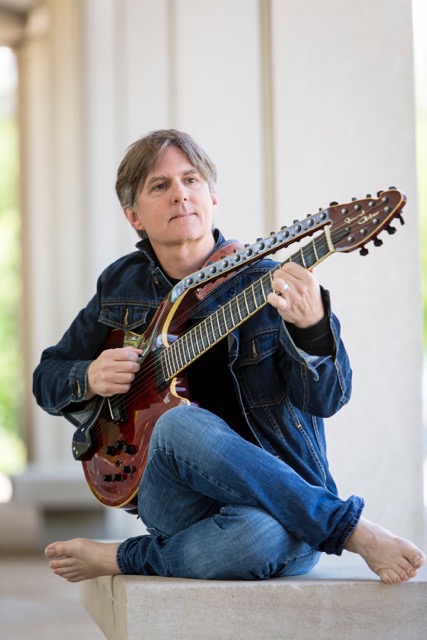 When Music Worlds Collide is an evening of Carnatic Fusion, Indian Jazz and cross- cultural rhythmic expression. Each of the five musical soloists have mastered the innovative aspect of their instruments, as well as the East and West element. They will dazzle and astound listeners with their original tunes and collaborations.

“I come from a family of inventors," says the St. Louis-based artist. “in my household growing up, there was always this freedom to go your own way, so I thought 'Why not build an instrument? Why not be a guitarist, but play Indian music? That is just what I did."

Hailed as the world's leading solo bassist, Manring has been pushing the boundaries of bass guitar for more than three decades. Building on conceptions from his teacher, the late Jaco Pastorius, Manring has developed a new approach that includes unorthodox tunings, techniques and methodologies. He has earned two gold records, Grammy and Bammie nominations, a Berklee School of Music Distinguished Alumni Award, numerous Bass Player Magazine Reader's Poll awards, including 1994 Bassist of the Year. Manring was also the subject of a PBS TV documentary, “The Artist's Profile: Michael Manring" and a YouTube video playing his iconic solo piece “Selene" with over a million views.

Grammy Award winner Henry Kaiser is widely recognized as one of the most creative and innovative guitarists, improvisers, and producers in the fields of rock, jazz, world, and contemporary experimental music today. The California-based musician is extensively recorded, as well as having appeared on more than 270 different albums, while scoring dozens of television and film soundtracks. He has released a series of tributes to Miles electric music, including rock, jazz, avant-garde, and classical Indian music players. Kaiser has spent two and a half months in Antartica on a National Science Arts and Writers Program Grant. His underwater camera work was featured in two Herzog films which he also produced and composed the score. Kaiser was nominated for an Academy Award for his work as producer as Encounters at the End of the World, however he is known to have an immense collection of guitars, amplifiers, and effect pedals that he has amassed to achieve “sonic diversity."

Composer, master percussionist, multi-instrumentalist, video artist, inventor, author and educator Rick Walker has been on the cutting-edge of music for 35 years. A founding architect of the World Beat movement in the early 80's, he is now one of the leading lights in the emerging International Live Looping movement.

Todd Mosby is a composer and innovator in the field of instrumental acoustic and electric guitar, contemporary instrumental composition, and improvisation. He has mastered multiple musical forms including classical, jazz and Indian raga. This broad spectrum enables him to create works which are highly creative and intelligent. His live shows introduce audiences to constantly evolving, fun music moments! Mosby is currently in production on an acoustic guitar based set of recordings with Grammy Award winner and founder of Windham Hill Records, Will Ackerman. Todd is the first and only guitarist in the world to become a member of the North Indian royal family of sitar, a family that traces its roots back 500 years. Mosby mastered the Imrat guitar —a hybrid sitar-guitar— that was the brainchild of his mentor Ustad Imrat Khan. Accord-ing to Kahn, “Todd is the most innovative musician of the 21st century." The 20-stringed instrument is the first of its kind, and is designed to bridge Eastern and Western music. Todd Mosby has shared the stage with diverse artists as The Rippingtons, Michael Franks, Spyro Gyra, and Chris Botti. He holds a Masters in Music from Webster University and a Certificate from Berklee College of Music.

World master of the Bansuri, Deepak is an incredibly versatile artist who is well-known for is evocative performances of traditional North Indian classical music, his collaborations with musicians of other genres, and his innovative compositions. He earned Best Instrumental Album in 1999 and 2000 at the South African Music Awards, and has an in-depth knowledge of East-West music traditions.