SOURCE: MICHAEL RICCI
May 3, 2010
Sign in to view read count 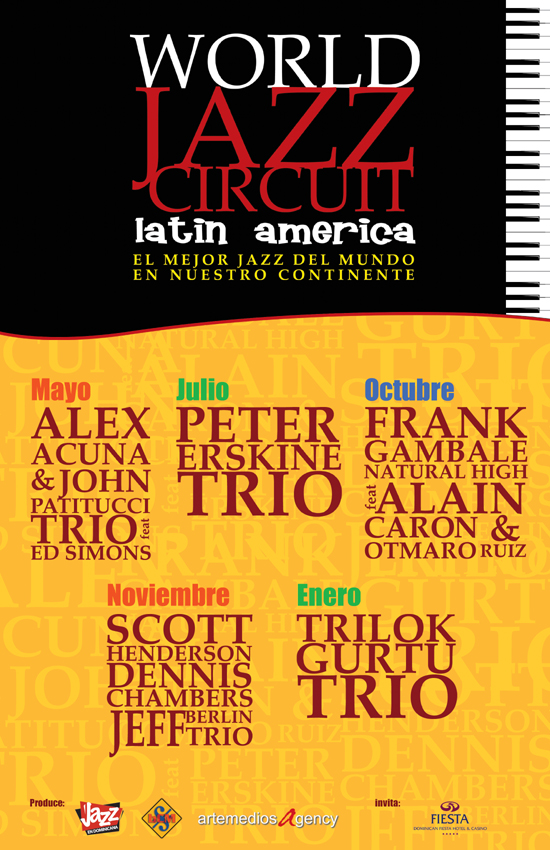 World Jazz Circuit Latin America 2010-2011 is an extraordinary event that offers a series of five jazz concerts of the highest level, which for the first time will take place in Latin America and will have world- class musicians playing at different venues in the region. In the case of the Dominican Republic the events will be presented by Jazz en Dominicana and sponsored by the Dominican Fiesta Hotel & Casino. This event has been recognized by the Ministry of Tourism as having a very high Cultural Artistic significance for the country.

Why a Jazz Circuit?

The Jazz World Circuit--Latin America (WJC-LA) consists of a series of jazz concerts of the highest international level, especially put together for the Latin American market. The circuit aims to create a synergy between producers committed to a specific annual programming in the region. This synergy allows an offer of a guaranteed package of concerts and is coordinated simultaneously from the offices in Milan, Italy; San Juan, Puerto Rico and Santiago, Chile, this enables the following: Which countries participate in the WJC-LA?

The countries committed or in process of definition are: Mexico, Dominican Republic, Puerto Rico, Costa Rica, Panama, Colombia, Venezuela, Brazil, Peru, Chile, Argentina and Uruguay. The participating countries participate as independent producers or co-producers, the concerts in the circuit.

The concerts are scheduled as follows: Who are the organizers of the WJC-LA?

The World Jazz Circuit--Latin America is a series of concert tours organized by ARTEMEDIOS, SA and bajoCONSTRUCTION Musik whose intent is to establish a strong presence of jazz, in all its forms, in Latin America. This unique project begins with the idea that ARTEMEDIOS, SA forged to ensure the exposure of this rich genre to the Caribbean, Central and South America countries.

How does the WJC-LA get to the Dominican Republic?

bajoCONSTRUCTION Musik contacted and contracted Jazz en Dominicana to be their representative in the Dominican Republic for the WJC-LA as well as the producer for the five concerts that will take place in this first ever circuit. Jazz en Dominicana will be presenting each concert in the Salon Ambar of the Dominican Fiesta Hotel & Casino and will feature a Dominican Jazz group as each night's opener.

Why does every concert for the circuit start in the Dominican Republic?

This is due to the fact that Santo Domingo has been chosen as the Cultural Capital of the Americas for 2010 by the International Bureau of Cultural Capitals, and in recognition of this well-deserved appointment, “the World Jazz Circuit--Latin America" will be initiating each concert tour of the circuit in Santo Domingo.

The venue for the concerts will be the Amber Room (Salon Ambar) at the Dominican Fiesta Hotel & Casino, in Avenida Anacaona No. 101 in the capital city of Santo Domingo.

So plenty of excellent music for Jazz lovers in Latin America as the World Jazz Circuit-Latin America 2010 initiates its first ever series of concerts in Santo Domingo, Dominican Republic on May 26th.