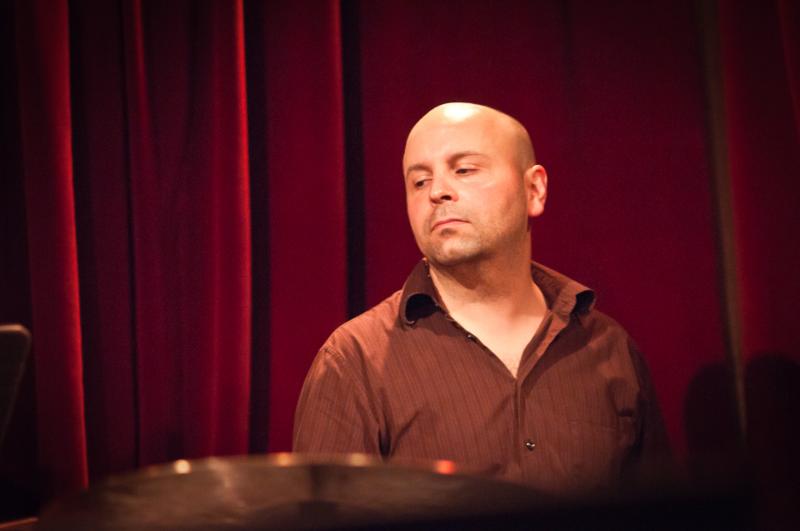 “Michel has the instincts of a leader." —Jimmy Giuffre

“Daniel Kelly is a pianist and composer who confidently splits the difference between murky history and sleek progressivism." —The New York Times

WORKS, featuring Michel Gentile (flute), Daniel Kelly (piano) and Rob Garcia (drums), is the resident ensemble of the vibrant non-profit organization Connection Works (http://www.ConnectionWorks.org ). Bandleaders in their own right, these artists embrace the unique instrumentation of WORKS to forge a distinct and powerful voice. WORKS has garnered increasing attention from the media and the public alike, consistently receiving critic's picks from The New York Times and Time Out New York. Now with their debut self-titled recording, WORKS (available June 18, 2013), the trio of Gentile, Kelly and Garcia documents the creative original music that has been captivating audiences for over six years.

Since 2007, Gentile, Kelly and Garcia have presented over two hundred concerts, master classes and workshops, propelling Connection Works to the forefront of the Brooklyn jazz scene. The trio WORKS has initiated many adventurous projects. They have composed for and performed with a chamber orchestra, composed for string quartet, commissioned big band pieces featuring the trio (with the Joel Harrison Large Ensemble & the Andrew Rathbun Large Ensemble), and collaborated with a long list of esteemed guests, including such jazz heavyweights as Joe Lovano, Dave Liebman, Joseph Jarman, Scott Colley, Mike Formanek, Dave Binney and many others.

The music of the CD WORKS consists of three compositions and one soliloquy from each of the members of the trio, providing a lovely three-part symmetry:

Flutist Michel Gentile's compositions: “Voir Dire" (translates as “see say") - “Voir Dire" is a legal term that refers to the interviewing of prospective jurors to establish his/her biases. This piece takes a single melody and presents it in three different groupings, thus giving the listener several different points of view. “Commodius Vicus"- this is a musical canon in which the melody is presented at three separate tempos simultaneously. The title comes from the first line of Finnegan's Wake by James Joyce, which refers to the circularity of life. “C'est Bien Ça" (literally means, “it is good that" and/or “it is truly that") - this simple melody has a shifting harmonic foundation.

Pianist Daniel Kelly's compositions: “Hundertwasser" - named for the Austrian artist, architect, philosopher and environmentalist. Daniel first encountered his work when visiting Vienna in the 1990's and was deeply inspired by his art and philosophy. “Chorale" - exactly what its name suggests - a harmonically sophisticated four-part chorale that makes a strong emotional statement. “Emanglons" - throughout his life, the French writer and visual artist Henri Michaux wrote many reports from his journeys to invented lands. The “Emanglons" were some of the creatures he encountered there.

Drummer Rob Garcia's compositions: “Will" - the title refers to the will of an individual, as in will power. The piece reflects a tight, intricate, powerful aesthetic. “Island" - reflects on the feeling of aloneness with a lyrical melody over a driving undercurrent. “Spring Comes 'Round" - a composition played entirely out of tempo, until the final coda of the piece, showcasing a quirky, joyful and rhythmic melody.

Flutist and composer Michel Gentile is an active performer/composer of the NYC jazz scene. He received his Master of Music degree with distinction from the New England Conservatory of Music where he studied with Jimmy Giuffre, Dave Holland, Geri Allen, Mick Goodrick, and George Garzone. Gentile has appeared on record with Ray Charles, Anthony Braxton, Dave Kikoski, Bobby Previte, Jane Ira Bloom, Michael Formanek, and Imani Winds. He has performed with Joe Lovano, Dave Liebman, Fred Hersch, Kurt Rosenwinkel, Joseph Jarman, Scott Colley, and many others. Michel is also an avid educator with more than twenty five years experience.

Michel has studied composition with George Russell, John Heiss, and Muhal Richard Abrams and is very honored to be currently studying with Donna Doyle. Michel has composed for everything from solo instruments to large ensembles. His triple concerto for flute, piano and drums with chamber orchestra was premiered in April 2012 at the Brooklyn Conservatory of Music. He has also composed for radio, television and film media. His compositions have been featured on “Seize the Moment" 1994, “Trapeze Contortionist" 2001 “Red Balloon" 2005 and “Flesh and Steel" 2008. His most recent release is the acclaimed “Rock, Paper, Scissors" by Gentile-Romano.

A recipient of the Chamber Music America/ASCAP Adventurous Programming Award, Kelly has also toured as a US Jazz Ambassador throughout Southeast Asia and India. In 2011, he was commissioned by NYSCA to compose a concert-length work titled “Rakonto: A Sounding of Community Voices" incorporating recordings of the voices and stories of immigrants living in the ethnically diverse neighborhood of Flushing, Queens. He has been commissioned by five communities throughout New York State to create new works in his “Rakonto" series in 2013-14. Daniel has composed for chamber orchestra, film and multi-media theater works that have toured internationally. He has released five CDs of original compositions.

Artist-run organizations are a new and successful trend in the jazz world, and Garcia has been a major force in this new way for jazz to thrive and reach new audiences. He is the founder and executive director of the artist-run, non-profit organization, Connection Works, and a member of the Brooklyn Jazz Underground, an association of independent artists with a shared commitment to creativity and community. He was also a founding member of the Douglass Street Music Collective, an artist-run rehearsal and performance space, featuring some of New York's most creative and cutting edge musicians/composers.