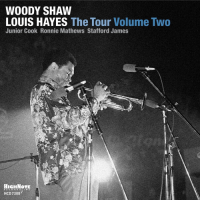 slideshow
In July 2016, I posted about a previously unreleased live album by the Louis Hayes-Junior Cook Quintet featuring Woody Shaw. It was recorded in Stuttgart, Germany, on March 22, 1976. The excellent album was entitled The Tour: Volume One, which teased the release of subsequent installments. Well, That day has arrived. The Tour: Volume Two, was recently released and it's even better than the first, if that's possible. It was recorded in March 1976 at a series of European concert venues, including Graz, Austria; Bremen, Munich and Wackerhalle, Germany; and Heist op den Berg in Belgium.

Trumpeter Woody Shaw was a sideman on the tour by one of the era's steamiest quintets. Drummer Hayes and tenor saxophonist Cook first recorded together when tget were members of the Horace Silver Quintet in 1958. The appeared on Silver's Finger Poppin' and Blowin' the Blues Away (both 1959) and toured with Silver's quintet. Hayes and Cook were together again in 1969 and in 1974 on several live dates and studio recordings led by trumpeter Freddie Hubbard. In 1975, Hayes and Cook formed a quintet with Shaw as a sideman. Between 1976 and '77, the group went on a European tour.

The band featured Shaw on trumpet, Cook on tenor sax, René McLean (Jackie McLean's stepson, on tenor saxophone on John Coltrane's Some Other Blues), Ronnie Mathews on piano, Stafford James on bass and Hayes on drums. In 1977, Cook left the group and Shaw became its co-leader with Hayes.

Volume Two is remarkable for several reasons. Chief among them are the choices made by Shaw's son, Woody Shaw III, who produced the album. All of the selections are standards, but nothing is cliche here about any of the performances. There's plenty of lyricism as the quintet opens songs by adhering to each one's original melody. But this traditional approach is quickly leavened by Shaw's searing horn and Cook's rearing saxophone.

All the Things You Are, for example, builds like a pressure cooker, with Shaw soloing through much of the song, with a bite-sized solo by pianist Mathews. On A Night in Tunisia, Cook takes an extensive, muscular solo followed by Shaw. 'Round Midnight features Cook and Shaw taking ballad solos, with Shaw's growing increasingly hot.

The last three selections are exceptional. Some Other Blues finds Shaw and Mathews taking exceptional solos, with McLean providing texture against Shaw's horn on the song's intro and outro.

Invitation is the album's high point. Shaw's solo is beyond belief. The 11:19 track is a spirited version, moving fleetly through the song's theme, hungrily driving toward the solo zone. Hayes is richly stormy on the drums throughout, and Cook wails during a  lengthy solo. Then Shaw enters like a hornet, providing a stinging, sizzling solo. The song becomes so involved that I found it hypnotic as I followed Shaw's lines. The final track is What's New?, a ballad on which Shaw plays with roiling grace.

Listening to Shaw, one senses that he isn't blowing the mouthpiece as much as he's kissing it. The fire he adds to his solos is so gripping and action-packed, you find yourself transfixed. One can only hope for Volume Three and beyond.