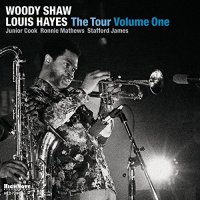 slideshow
Let's stick with 1976. Yesterday I posted about Dolo Coker's California Hard, a superb album recorded by the pianist for Xanadu in December of that year. Today, let's dig a newly released album by a working band formed by drummer Louis Hayes in '76 to tour Europe. The live album, Woody Shaw and Louis Hayes: The Tour, Volume One (High Note), was recorded in Stuttgart, Germany, on March 22, 1976.

Recorded at the height of the jazz-rock fusion movement—when mysticism, psychedelia and electronic instruments overwhelmed the beauty of jazz's original intent—Hayes pushed back. Along with Shaw, he was determined to prove that acoustic jazz was alive and significant in Brooklyn, where many top jazz musicians lived and networked. As this album makes clear, acoustic jazz remained vibrant and meaningful into the late 1970s.

The idea for the band came when pianist Cedar Walton returned from a tour of Europe that year and told Hayes that a producer there wanted him to bring a band over. According to Hayes in the liner notes written by Woody Shaw III, the album's producer, he brought together tenor saxophonist Junior Cook (above), pianist Ronnie Mathews and bassist Stafford Jones. Woody Shaw was only too happy to join. As Woody Shaw III writes, “Both men shared common paths through the music and were devoted to ensuring the preservation of its highest standards by way of the collective mettle of their accumulated efforts, their sense of persistence and total devotion to craft."

The album is dazzling and absorbing. It opens with Shaw's The Moontrane, which somehow sounds and feels more urgent than on any other recording of the song that I've heard. Larry Young's hypnotic Obsequious is next, with fiery solos by Cook and Shaw (above) that never run out of ideas or off the rails. Walter Booker and Cedar Walton's Book's Bossa is a Horace Silver-like Latin cooker that pulsates with energy.

Ronnie Mathews tears up the keyboard on his modal composition Ichi-Ban, reaffirming how great a physical pianist he was. Peggy Stern's funky Sun Bath is as close to a ballad as any tune on this album is going to get. It was first recorded by Shaw a year earlier on his album Love Dance. The last song on the album is the standard Invitation. Shaw and Cook quickly dispense of the song's melody and proceed to turn up the heat and take the tune apart.

Interestingly, this album is the first to shed light on the quintet that Hayes assembled and took to Europe in early 1976. To my knowledge, there are no other known live recordings of the band abroad. I'm not sure how this tape surfaced. My guess is the concert was recorded by the band but foolishly wasn't picked up by leading labels when the musicians returned to the States. I'm just glad Woody Shaw III released it with the help of Joe Fields of High Note Records. The music is enormously exciting and important.

Through this album, we now know what the Europeans heard when the band arrived. The music is breathtaking and among Shaw's finest outings, not to mention the efforts of a perfectly chosen group. As this quintet proved in 1976, acoustic jazz as a creative force wasn't dead. The record labels at the time were another matter.