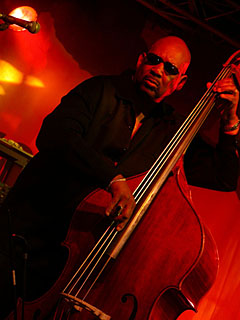 slideshow
PHILADELPHIA, PA – After an exciting month of concerts inspired by the music of 1947, Woodmere Art Museum continues bringing audiences to their feet with sounds that reflect the global journey of jazz. Taking concertgoers through the months of May and June, Friday Night Jazz pays homage to the Great American Songbook, gypsy jazz, Stevie Wonder and culminates with a stunning tribute to the work of Dexter Gordon on Friday, June 21.

Grammy Award-winning tenor saxophonist Dexter Gordon was an American jazz icon and one of the most prominent sax men on the jazz scene in the fifties and sixties. He is considered to be one of the first musicians to translate the language of bebop to sax, and his influence is heard in the works of John Coltrane, Sonny Rollins, Stan Getz and many others. The Dexter Gordon legacy is being celebrated through Dex @ 90, an international series of concerts celebrating Gordon’s career and achievements during what would have been his 90th year, featuring screenings of his film Round Midnight and talks by his wife, Maxine Gordon.

“Dexter Gordon forged a blazing path of melody and harmonies that created his own signature style. We’re honored that the sound and setting of the Friday Night Jazz series at Woodmere Art Museum caught the attention of the Dexter Gordon Society and that they feel Woodmere is a fitting addition to Dex @ 90,” said Warren Oree, musician and producer of Lifeline Music Coalition, Inc, which produces Friday Night Jazz.

During performances, all of Woodmere’s current exhibits will be open to visitors, including Charles Searles: A Focus on the Figure (on view through June 15), The Promise of Peace: Violet Oakley’s United Nations Portraits (through June 30), Private Artist/ Public Life: Ethel V. Ashton (through June 30) and In Front of Strangers, I Sing: 72nd Annual Juried Exhibition, juried by artists Dona Nelson and Rubens Ghenov, opening May 25 and on view through September 1.

Woodmere Art Museum is located at 9201 Germantown Avenue. Friday Night Jazz continues through June 21 and takes place Friday evenings from 6:00-8:00 p.m. All concerts include light refreshments. Tickets are $20 general admission or $10 for museum members. Tickets can be purchased online at woodmereartmuseum.org until 11:59 p.m. on Thursday and are available at the door one hour prior to the start of the concert. For more information call 215-247-0476.

Performances include light fare and wine.

May 10: Jazz in the Key of Ornette Coleman. A look and listen into the soundscapes of the leader of the “free” jazz movement of the 1960’s. Saxophonist Bobby Zankel navigates through the Coleman songbook with tunes like “Lonely Woman”, “W.R.U.”, “Free Jazz”, “Forerunner” and more.

May 31: Musica Caliente: Johnny Cruz. Johnny Cruz and his Latin Ensemble put Salsa in the music and explore the rhythms and tunes like “Oye Como Va”, “El Cantante” and “Cuarte de Tula”, making this one of the hardest sounds to listen to from your seat.

June 7: Swingin’ Gypsy Style with The Hot Club of Philadelphia. This band bring Django and all the hot sounds of gypsy jazz to the bandstand. Guitars, banjos, clarinets and vocals make this a musical stew worth savoring. Playing some Django favorites like “Bistro Fada”, “Minor Swing”, “Muages” and more.

June 14: Summer Sunshine: A Tribute to Stevie Wonder. This talented composer, musician, producer and musical philosopher contributed greatly to the world of music. The Arpeggio Jazz Ensemble, with special guest artists, pay tribute to Stevie Wonder by performing some of his memorable contributions to the American songbook, including “You are the Sunshine of My Life”, “My Cherie Amour”, “Signed, Sealed, Delivered”, “You and I” and “Ribbon in the Sky”.

June 21: Dexter Gordon: The Hardest Bopper. Join Dexter Gordon’s widow in this tribute to one of the most prominent sax men on the jazz scene in the fifties and sixties. This will be a “blowing session” that confirms how he influenced many of the greats like John Coltrane, Sonny Rollins, Stan Getz, etc. Sax man Umar Raheem will take us to the “Gordon” with some of Dexter’s signature pieces: “Willow Weep for Me”, “My Romance”, “Scrapple from the Apple” and “Love For Sale”.

Housed in a 19th-century stone Victorian mansion on six acres in the Chestnut Hill section of Philadelphia, Woodmere first opened its doors to the public in 1940. The building, grounds and the nucleus of the Permanent Collection are the benefactions of Charles Knox Smith (1845 – 1916), who wished “to awaken the spirit of, the appreciation of, and the knowledge of art... in the City of Philadelphia and surrounding territory.” Today, the Permanent Collection consists of more than 3,000 works of art, celebrating the art and artists of Philadelphia.