A bounty of beautiful new William Parker compositions performed by two of his flagship ensembles. 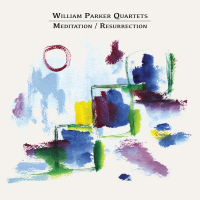 slideshow
Meditation / Resurrection is a double-album presenting a bounty of beautiful new William Parker compositions performed by two of his flagship ensembles, the Quartet-&- In Order To Survive. It was recorded & mixed live during a one-day studio session in late 2016. This is Parker & the groups’ followup release to 2013’s epic Wood Flute Songs box set.

At the core of both groups is Parker’s foundational bass together with rhythm twin, the incomparable Hamid Drake. Their partnership–two decades deep now–is one of the great rhythm sections in recorded history. Alto saxophonist Rob Brown is likewise featured throughout. Brown is one of the all-time great improvisers on alto, and the springboard of Parker’s bands in which he has been perennially featured always brings out his best.

Pianist Cooper-Moore features on Album/CD2 (In Order To Survive). He has been a very significant catalyst in the world of creative music for over 40 years. As William writes in the notes, “Cooper-Moore is one of the special people who speaks and plays from the heart all the time with power and grace. If my music has had any success over the last 20 years it is because he has been a major inspiration and contributor.” Cooper-Moore will be the Lifetime Achievement Honoree at the 2017 edition of the Vision Festival in NYC. In Order To Survive will perform as part of this celebration on Monday, May 29.

Trumpeter Jalalu-Kalvert Nelson appears on Album/CD1 (William Parker Quartet). Hailing from Oklahoma City, and a resident of Switzerland since 1994, he is a major figure in his own right as a composer of modern classical and world music, and is well-versed in the language of blues, jazz and improvisation. From the liner notes, “Jalalu is always able to transform any music situation into a magical experience.”

William Parker’s exceptional gift as a composer of indelible melodies and infectious rhythms have long been intrinsic to his art, and it has always been on full display in the work of the quartets featured here. Being that these groups are among the highest caliber jazz bands of our time, Parker’s luminous compositions are brought to vibrant blossom.