The historic and only performance meeting of these two renowned and innovative bass masters. 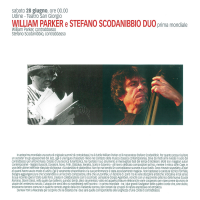 On March 24, Centering Records (dist. by AUM Fidelity) will release Bass Duo, which presents the historic and only performance meeting of these two renowned and innovative bass masters, each representing distinct musical traditions; both fully committed to the summit at hand. It was recorded during the Udin&Jazz 2008 Festival in Udine, Italy at Teatro San Giorgio, and was produced for release by Parker on his own Centering imprint. Both William Parker and Stefano Scodanibbio are composers and improvisers possessing a deep sense of musical poetry, organic inventiveness, and personal style.

William Parker (Bronx, NY, January 10, 1952) was heralded some time ago by the Village Voice as “the most consistently brilliant free jazz bassist of all time” and Time Out New York named him one of the “50 Greatest New York Musicians of All Time.” He has been a key figure in the New York and European creative music scenes since the 1970s, and has performed extensively with Cecil Taylor, Don Cherry, Milford Graves, and David S. Ware, among many others. He has appeared on well over 150 albums to date, and has been perpetually presenting his own far-ranging, deeply potent, and highly acclaimed work as a leader since the mid-90s. A major new work of his as leader is forthcoming later this Spring as well.

Stefano Scodanibbio (Macerata, Italy, June 18, 1956 / Cuernavaca, Mexico, January 8, 2012). During his too short lifetime, Scodanibbio was renowned as an interpreter and collaborator with many of the major composers writing for the contrabass (Bussotti, Donatoni, Estrada, Ferneyhough, Frith, Xenakis, among others), and he performed dozens of works written especially for him in major festivals throughout the world. The Los Angeles Times acclaimed his “dazzling, disciplined virtuosity,” and later that “[he] lifted the instrument into new realms.” John Cage, on hearing his work Ryoanji performed by Scodanibbio, stated “his performance was absolutely magic. I was just amazed!”

From the liner notes to Bass Duo, by fellow bassist-composer Mark Dresser:

“Both bassists share the ability to give the impression of more than one person playing at a time. Together they project a musicality bigger than the two individuals. At times they are so connected [here] that it is difficult to tell one from the other. At other times their signature approaches are evident. This live recording demonstrates their great ability to share and co-create. We are lucky indeed for this document!"