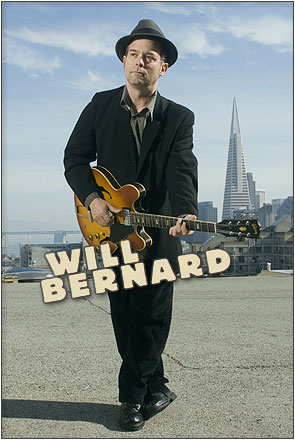 slideshow
Grammy-nominated guitarist Will Bernard will be performing select dates in California in June with his trio featuring Hammond B3 organist Wil Blades and drummers Simon Lott and Scott Amendola.

The Will Bernard Trio featuring Wil Blades and Simon Lott has been playing together for over three years and has performed to enthusiastic crowds in the US and in Europe. Bernard, originally from the Bay Area now living in New York has released 5 albums under his own name and has worked with a long list of musicians including Stanton Moore, Robert Walter, Charlie Hunter, Zigaboo Modeliste, Dr Lonnie Smith and John Medeski. Recently he has played concerts with Bernie Worell, Dr John, Booker T., George Porter Junior and others. He has received two Grammy nominations.

Wil Blades is an Organist from the Bay Area who is committed to keeping the Hammond B3 tradition alive. In the last few years he has been receiving more and more acclaim, appearing annually in the Downbeat critics poll and performing with the Stanton Moore trio, Amendola vs. Blades, and with his own group.

Simon Lott is one of the premier young drummers of New Orleans and is equally steeped in the traditions of New Orleans second line drumming, Electronica, Rock, R n' B, Hip Hop and the Avant-Garde. He has performed and recorded with the Charlie Hunter trio and is featured on the CD Mistico. He has also worked with Skerik, Marco Benevento, Anders Osborne, Dr. lonnie Smith, George Porter Jr.

Scott Amendola is a master drummer and most renowned sideman gig is supplying the requisite open-minded intensity for the Nels Cline Singers. He has integrated the music of Thelonious Monk, James Brown, and Rahsaan Roland Kirk with the nineties funk-jazz group T.J. Kirk, the first of many collaborations with guitarist Charlie Hunter; taken a wholly different but equally slanted view on the Monk book with the collective trio Plays Monk along with bassist Devin Hoff and clarinetist Ben Goldberg; and burrowed deep into Duke Ellington and Billy Strayhorn's “Far East Suite" in a duo with Hammond B-3 organist Wil Blades.