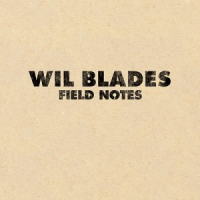 slideshow
No less a jazz organ authority than the legendary Dr. Lonnie Smith has called Wil Blades “the future," anointing him the heir apparent “to carry on the legend [and] the legacy of the organ, of the B-3." Blades shoulders that responsibility with nonchalant virtuosity and infectious groove on his forthcoming studio album, Field Notes, out August 19 from Royal Potato Family. The nine songs report back from the rich incubator that is the road, with pieces written from snippets recorded at soundchecks, gigs and jam sessions—field recordings of the jazz trio in its natural habitat. Blades is joined by guitarist Jeff Parker (Tortoise, Joey DeFrancesco, Joshua Redman) and drummer Simon Lott (Charlie Hunter, Will Bernard), both musicians who share Blades' grounding in tradition and urge to push it forward.

“Both those guys can play straight-ahead jazz, they can funk, they can take it out, they can go in so many different directions," Blades says. “I always had the idea in my mind that doing a trio with Jeff Parker and Simon Lott would have a cool vibe and would be very open.”

The 34-year old, Chicago-native, Berkley, CA-based artist is a cornerstone organist of his generation—a modern voice in a lineage that includes giants like Richard "Groove" Holmes, Charles Earland and Brother Jack McDuff. Having studied at the feet of the legendary Dr. Lonnie Smith and played alongside John Lee Hooker, Melvin Sparks and Idris Muhammad, Blades has absorbed the spirit of the masters. His extensive collaborations with contemporaries such as Stanton Moore, Nicholas Payton and Billy Martin also reflects the high regard in which he's held by the current generation. The dichotomy between those experiences has provided the insight for ideas that allow him to push the tradition forward in the 21st century.

“My whole thing is having a foot in the past and trying to have a foot in the future and to bring those two worlds together as much as possible," says Blades. “On this record, I was definitely trying to come out of the lineage but then trying to look forward at the same time."

This vision is evidenced in Blades’ scintillating and soulful playing throughout Field Notes, whether on the soul-into-psychedelia shimmer of “Chrome" (developed from an improvisation with Billy Martin) or the blues-meets-electric-Miles groove of “Dewey" or the African rhythmic accents of “Addis," inspired by a 2011 trek to Ethiopia, where Blades got to work with local musicians. The organist cedes the spotlight entirely to Jeff Parker on “Parks N’ Wreck," a vibe-based tune driven by Blades' memorable bass line that was inspired by the guitarist's work in the hip-hop realm. Field Notes' opening track, “Miller's Time," is an insistent syncopated blues, which sets the tone for what's to follow on an album that ranges from the alluring soul-jazz balladry of “Forgetful" to the slinky R&B of “Red Lanterns Are Blue," which draws inspiration from J Dilla and Patrice Rushen.

As his endorsement suggests, if Dr. Lonnie Smith and his fellow members of the B-3 pantheon are concerned about their legacy they can rest easy after hearing Field Notes. Wil Blades ably carries on the organ tradition while infusing it with modern influences, suggesting a vital and compelling future for the instrument and for this trio.