Why The Cornet? (Revisited And Revised With Video) 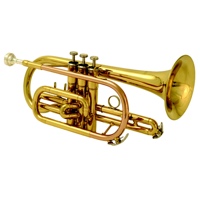 Because of circumstances too complicated and mundane to relate, there will be no Monday Recommendation today. Stuff happens. Maybe there will be a Tuesday Recommendation tomorrow. In the meantime, here is a Rifftides post that appeared nearly ten years ago. Possibly you had forgotten about it. The staff has removed outdated links and added video that is anything but outdated.

Deborah Hendrick read the comment about Bix Beiderbecke having been a cornetist, not a trumpeter, and asks: “As part of my continuing education, why would a musician choose a trumpet over a cornet, or the other way around?"

Experts on brass instruments have written volumes on that question. Here is my non-voluminous answer.

The trumpet’s tubing is elongated and relatively straight until it reaches the flare of the bell. That gives the instrument volume and brilliance. The cornet’s tubing is tightly wound compared to that of the trumpet, resulting in more air resistance when the player blows into the horn. Its tubing is conical, growing bigger around as it approaches the bell. Taken together, those two factors give the cornet a mellower, softer sound than the trumpet’s. Trumpets predominate these days in orchestras and bands, but through the last half of the nineteenth century and well into the twentieth, the cornet was king. It was developed by the Frenchman J.B. Arban, who literally wrote the book on how to play it. Arban’s Complete Conservatory Method is still the cornetist’s, and trumpeter’s, bible.

John Philip Sousa and Herbert L. Clarke, disciples of Arban, were virtuoso cornetists who led famous brass bands and further influenced the popularity of the instrument. When jazz came along, cornet was the default lead brass instrument in the early New Orleans bands, as it was in Chicago and New York in the 1920s and into the thirties. Louis Armstrong and Bix Beiderbecke were cornetists. My guess is that Armstrong switched to trumpet because when he organized his big band around 1930, he wanted to project more, but his great early recordings were on cornet. Beiderbecke, to my knowledge, played cornet exclusively. Many great jazz players thought of as trumpeters were, in fact, cornetists, among them Bobby Hackett, Rex Stewart, Ruby Braff, Jimmy McPartland, Wild Bill Davison, Nat Adderley and, often, Thad Jones. They preferred the cornet’s fluency and intimacy. Few modern trumpet players also play the cornet, but many double on flugelhorn, which can achieve similar, but not identical, mellowness. Committed cornetists are passionate in their love for the instrument, witness this quote from a player named Mike Trager.

I equate my cornet with a good-natured golden retriever and my trumpet with a vicious Doberman pinscher.

Left to right, you see flugelhorn, trumpet, cornet and piccolo trumpet and, in front, assorted mutes. The flugelhorn and the piccolo trumpet here are the four-valve variety. You know what I say about that? It’s hard enough to play three valves. I’ll leave well enough alone. But I wish I had my old cornet back. Maybe I’ll prowl the pawn shops.

So, you may ask in 2016, how about a cornet demonstration? Well, of course. Here’s one by a master, Warren Vache, at the 2013 Ancona Jazz Festival in Italy, with pianist Paolo Alderighi. They play Duke Ellington’s “It Don’t Mean a Thing if It Ain’t Got that Swing” and “Prelude to a Kiss.” Their encore is one chorus of Sammy Fain’s “I’ll Be Seeing You.”