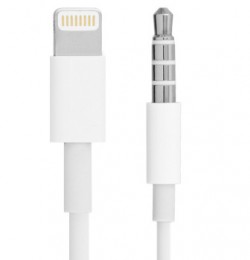 The tech rumor mill recently dropped the news that, on the latest model of iPhone, Apple my be planning to eschew the conventional analog heaphone jack in favor of the iPhone Lightning connection, something which would likely end up hurting consumers in the long run.

It's been rumored for months now that the next iPhone will be removing the standard analog headphone jack— the same jack that's existed on portable audio devices for ages. It would immediately make a whole bunch of headphone and microphone products obsolete overnight for those who use iPhones. And while some have compared it to when Apple surprised everyone nearly two decades ago in removing the floppy drive from the iMac, this is quite different. The floppy drive really was pushing the end of its necessary existence, and with the internet and (not too long after) the rise of USB, the internal floppy drive seemed less and less important. But that's not the case with the standard audio jack.

Back in June, Nilay Patel at the Verge had an excellent take on why this move would be user hostile in very dangerous ways, starting with the fact that forcing audio through the iPhone Lightning connection would mean DRM: Oh look, I won this argument in one shot. For years the entertainment industry has decried what they call the “analog loophole" of headphone jacks, and now we’re making their dreams come true by closing it.

Restricting audio output to a purely digital connection means that music publishers and streaming companies can start to insist on digital copyright enforcement mechanisms. We moved our video systems to HDMI and got HDCP, remember? Copyright enforcement technology never stops piracy and always hurts the people who most rely on legal fair use, but you can bet the music industry is going to start cracking down on “unauthorized" playback and recording devices anyway. We deal with DRM when it comes to video because we generally don’t rewatch and take TV shows and movies with us, but you will rue the day Apple decided to make the iPhone another 1mm thinner the instant you get a “playback device not supported" message. Winter is coming.

With the latest rumors insisting that Apple is definitely doing this, Cory Doctorow has also weighed in to make the same point and go in much greater detail about how troubling this is:

Once all the audio coming out of an Iphone is digital— once there's no analog output— Apple gets a lot more options about how it can relate to its competitors, and they're all good for Apple and bad for Apple's customers. Just by wrapping that audio in DRM, Apple gets a veto over which of your devices can connect to your phone. They can arbitrarily withhold permission to headphone manufacturers, insist that mixers be designed with no analog outputs, or even demand that any company that makes an Apple-compatible device must not make that device compatible with Apple's competitors, so home theater components that receive Apple signals could be pressured to lock out Samsung's signals, or Amazon's.

What's more, once Apple gets the ability to add DRM, the record industry gets the ability to insist that Apple use it ("A phaser on the mantelpiece in Act One must go off by Act 3"- Pavel Chekov, Star Trek: TOS). In 2007, Steve Jobs published his Thoughts on Music, in which he said, basically, that the record industry had forced Apple to put DRM in its ecosystem and he didn't like it. The record industry is still made up of the same companies, and they still love DRM. Right now, an insistence on DRM would simply invite the people who wanted to bypass it for legal reasons to use that 3.5mm headphone jack to get at it. Once that jack is gone, there's no legal way to get around the DRM.

Perhaps worst of all is the impact on security research: because the DMCA has been used to attack researchers who disclosed defects in DRM-restricted technologies, they are often unable or unwilling to come forward when they discover serious vulnerabilities in technologies that we rely on. The Iphone audio interface is two-way: it supports both input and output. A bug in that interface turns the phone to carry with you at all times, to all places, into a covert listening device. A DRM system on that interface makes that bug all-but-unreportable, guaranteeing that it will last longer and hurt more people before it finally becomes public.

As Cory notes, these are not hypothetical stories and fear-mongering, they're all examples from what we've seen happen before, over and over again, when things are pushed into a DRM-based world. Cory is hoping that if Apple really does drop the audio jack— as many now expect— then it should simultaneously declare that the digital audio output is not “an effective means of access control," which would then mean it's not covered by the anti-circumvention laws of the DMCA. But, of course, does anyone actually expect Apple to do that? It has almost no incentive to unless the public rejects this situation in massive numbers, which seems unlikely.

Hopefully, those who make Android and other phones will not follow down this same path.