Who Was Doc Pomus? 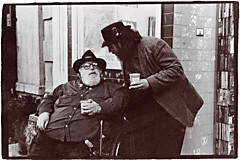 slideshow
Few white pop-rock songwriters of the 1950s and '60s started out as miserably as Jerome Felder. Polio-stricken at age 7, Felder was placed in body casts and then an iron lung before he wound up in leg braces and crutches. Stuck in bed for years, Felder spent a lot of time listening to the radio, which is where he discovered Big Joe Turner belting out Piney Brown Blues. Felder identified with the blues, which spoke to his own misfortune.

One day when he was 17 years old, Felder got dressed in a suit and tie and left his parents' apartment in Brooklyn. He took the subway into Manhattan to hear trumpeter Frankie Newton. But when the club owner saw him—with the leg braces and crutches and awkward crab-like movements to get around—he demanded to know why Felder was there. Felder lied and told him he was a blues singer. “A blues singer, eh?" the manager said, hands on his hips. “Then why don't you get up there and sing."