Vessel in Orbit is the first new group music in over a decade from singular drummer-composer Whit Dickey, created together with the equally impeccable improvisers Mat Maneri on viola and pianist Matthew Shipp. 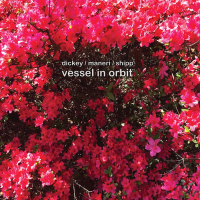 On March 24, AUM Fidelity will release Vessel in Orbit, the first new group music in over a decade from singular drummer-composer Whit Dickey. Created together with the impeccable improvisers Mat Maneri on viola and pianist Matthew Shipp, it is a richly melodic and deeply focused album; structural integrity and emotional resonance are paramount throughout. Each of these men has a lifetime commitment to creative music, and they share a musical relationship with one another that dates back decades. Dickey’s fully engaging compositional structures provide fertile platforms for his esteemed colleagues and – as is par for his work as a leader – he cedes the spotlight to the collective as a whole. Wide-open listening and fluid expression abound here. This is a deep beauty, a very special album; not to be slept on.

In the 90s, Whit Dickey was an elemental member in the groups of both David S. Ware and Matthew Shipp. His tremendous debut as a leader was Transonic (1998, AUM005), followed on AUM by Life Cycle (which also featured Maneri & Shipp), and then a series of fine albums on the Riti and Clean Feed labels. He re-joined Shipp’s trio from 2007-12, and in 2015 appeared once again on the pianist’s beautiful tribute To Duke on the RogueArt label. In recent years, Whit has recorded extensively with saxophonist Ivo Perelman, and in late 2016 he released Fierce Silence, a duet with cornetist Kirk Knuffke.

This album also marks the welcome return appearance of Mat Maneri on AUM Fidelity, who was previously featured on the sublime A Cloud of Black Birds (1998, AUM009) & Soul Search (2000, AUM014) together with guitarist Joe Morris, as well as his own epic album production by the Maneri Ensemble, Going To Church (2002, AUM024). Maneri’s most recent release as co-leader is Transylvanian Concert (2013, ECM) together with pianist Lucian Ban, and he was fully featured on drummer Ches Smith’s auspicious ECM debut in 2016.

Since the mid-90s, Matthew Shipp has been perpetually proving his status as one of the most important, and singularly compelling, jazz pianists of the modern era. His work on AUM dates to the label’s inception; most recently he has been featured on The Darkseid Recital(2014, AUM088), his second stellar duet with alto saxophonist Darius Jones; and in duo with David S. Ware on last year’s Live in Sant'Anna Arresi, 2004 – the second installment in AUM’s ongoing DSW Archive Series.

“An elastic, complexly-woven hymn to the rising chords of imagination. If you’d like proof that freedom and coherence are not enemies but lovers, look no further.” –The Wire

“I’ve never heard an unconvincing performance by this drummer, but this record is brilliant even by his standards. It’s like the clarified atmosphere after a rainstorm. Electric.” –Hi-Fi News