When Grant Green Got Funky 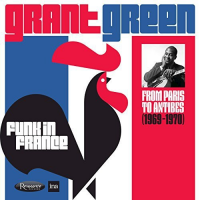 slideshow
Two previously unissued Grant Green albums are giving the guitarist’s music something of a comeback. Green, who died in 1979 when he was 47, recorded extensively for the Blue Note and Prestige labels in the 1960s and ‘70s with Stanley Turrentine, Kenny Dorham, Hank Mobley, Lee Morgan and other leaders. Later, Blue Note recordings under his own name included such distinguished sidemen as Hank Mobley, Sonny Clark, Elvin Jones, Houston Person and Larry Young.

In the late 1960s and early ‘70s, Green began adapting elements of the stylistic offshoot known as funk. He wasn’t alone. Miles Davis, Herbie Hancock and George Benson were also incorporating funk in hopes of capturing wider shares of audiences oriented toward the basic—not to say primitive—emotions at the heart of much rhythm-driven pop music of the day. Blue Note albums like Carryin’ On and Ain’t It Funky Now illustrate Green’s dedication to the trend. The first track of Funk In France, recorded live in a Paris studio, is a cover version of the ultimate funk star James Brown’s “Don’t Want Nobody To Give Me Nothing (Open Up The Door I’ll Get It Myself).” The album also captures Green at the top of his bop game in two classics by Sonny Rollins, “Oleo” and “Sonnymoon For Two,” and in an untitled minor blues that incorporates aspects of both idioms. Green’s two-man rhythm section for the studio recording is drummer Don Lamond, the motivational drummer of Woody Herman’s great Second Herd, and bassist Larry Ridley during the period when he was having success with Freddie Hubbard, Philly Joe Jones and Dinah Washington, among many others. Barney Kessel, whose career went back as far as Lamond’s, joins Green to provide moving second-guitar accompaniment on Parisian Charles Trenet’s “I Wish You Love.” 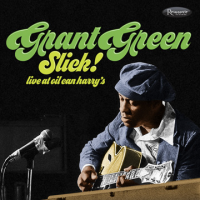 Slick! was recorded in 1975 at Oil Can Harry’s, a club that thrived in Vancouver, British Columbia, for a decade in the sixties and seventies. The CD’s first half finds Green in familiar territory with Charlie Parker’s blues “Now’s The Time.” A supremely relaxed 26-minute version of Jobim’s “How Insensitive” demonstrates Green’s absorption with the Brazilian music that had captivated Americans. Then, Green’s funk unit revs up with a medley that includes Stanley Clarke’s “Vulcan Princess,” the Ohio Players’ “Skin Tight,” Bobby Womack’s “Woman’s Gotta Have It,” Stevie Wonder’s “Boogie On Reggae Woman” and the O’Jays’ “For The Love Of Money”—in all, a fair overview of the pop-funk landscape of the mid-1970s. Green’s guitar and Ronnie Ware’s electric bass fairly leap out of the speakers during the medley until Green dials back the funk a bit for a relatively relaxed interval by Ware’s bass. Emmanuel Riggins’ electric piano, Greg ‘Vibration’ Williams’ drums and Gerald Izzard’s array of percussion round out the band. Izzard’s panoply of effects includes what may be bird calls and a police whistle. This newly-discovered music probably won’t replace Green’s beloved Blue Notes on collectors’ shelves, but the Resonance discoveries offer a way for those new to this gifted guitaist to make his acquaintance. In Slick! the Oil Can Harry’s audience gives Green and his quintet a joyous reception.