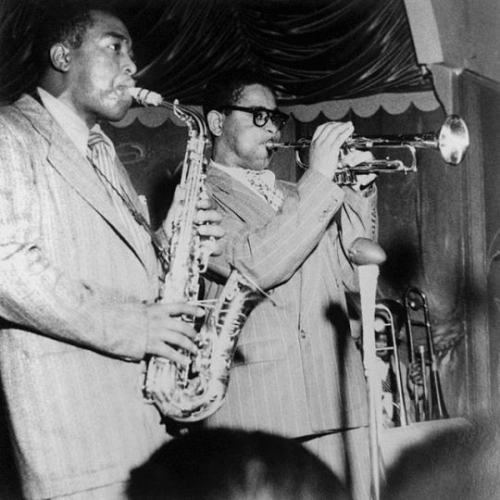 slideshow
Bebop officially emerged in 1945 when Dizzy Gillsepie recorded Be-Bop (also known as Dizzy's Fingers). The jazz press didn't start using the term until 1946 to define an entire genre of emerging music. While bop continued to develop in New York and Los Angeles, it wasn't until late 1948 and '49 that the jazz style hit its popularity peak. Why 1949? For one, the American Federation of musicians and the record labels had finally come to an agreement on contributions to a union fund meant to hire unemployed musicians displaced by technology. Once a deal was reached in the fall of '48, radio stations were able to play records on the radio again. This lead to a rise in jazz broadcasting.

Other factors helping bebop to become a national rage was the launch of the 33 1/3 LP by Columbia in 1948. The longer-playing record led to new lines of two-speed affordable phonographs aimed at the home market, boosting record sales and making room for new styles of music. As suburbs throughout the country expanded, subscriptions to magazines such as Life surged. In the years before the widespread household ownership of television, these magazines filed with photos were covered national trends such as bebop. Especially attractive to magazines were the novelty aspects of the bop, such as the bop handshake and fashionable beret and horn-rimmed glasses. Other supportive trends included the proliferation of independent radio stations and lingo-driven jazz disc jockeys, and the growing popularity of jazz writers who covered bop's development and personalities.

By 1949, movie stars were embracing bop in photos at Hollywood nighteries, and teenage fan clubs popped up as hipster rebellions against swing and bland pop favored by their parents. Run through a jazz discography for the year, you'll see a few dozen 78s with the words bop, bebop or be-bop in their titles. Labels competed to cash in on bop's quirky idioms, customs and fashion.

Here are 10 records with bop or bebop in their titles recorded in 1949 when bebop meant business [photo above of Ava Gardner and Dizzy Gillespie]:

And here's George Shearing on accordion playing Good to the Last Bop...