When Bill Met Sonny and Terri 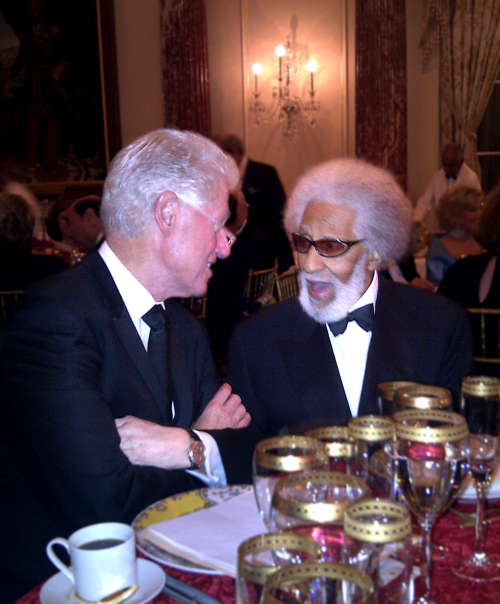 slideshow
Earlier this week, I visited Terri Hinte's Facebook page. Terri is Sonny Rollins' publicist and close pal. On her page was a post on a phone call she received this week. I won't spoil Terri's story by telling you why she received it. I'll only tell you that I sent Terri an email with some questions and she responded with more information, which enabled me to build a post. [Photo above of Bill Clinton and Sonny Rollins by Terri Hinte]

Here's what Terri told me...

“Back in December 2011, I accompanied Sonny to the Kennedy Center Honors State Dinner. Hillary Clinton, who was Secretary of State at the time, was the evening's host. Different celebrities gave toasts to different honorees. Bill Clinton gave a toast to Sonny.

“Bill clearly had done some research—listening to Sonny's music and thinking about the effect it has had on him over the years. Though he referred occasionally to notes, his remarks had an improvisational feel:

There are many people in this room who could do this better than me: Jimmy Heath, Joe Lovano, Ravi Coltrane, Jim Hall. But it's appropriate because I'm just a fan. I discovered Sonny Rollins when I was about 15 or 16—about 50 years ago. I loved jazz, and I fancied that someday I might be good enough to do it. And I bought my first Sonny Rollins LP. I listened and listened, I listened the grooves off of it. I subscribed to Down Beat magazine and I kept thinking: if I read every edition, sooner or later I will find one article that will explain to me what in the hell I just heard.

It was unbelievable, and it still is. Decade after decade after decade, this man explores the far reaches of the possibilities of what has lovingly been called the devil's horn. His music can bend your mind, it can break your heart, and it can make you laugh out loud. Still today, after all these years, if I wake up in kind of a bad humor or I'm worried about something, if I put on Sonny Rollins's version of Brown Skin Girl, I will laugh out loud.

I have thought so much about his unique gifts. He has done things with improvisation that really no one has ever done. In complexity and creativity, he rivals Coltrane.

On one of the three CDs I listened to to prepare my mind for this—the Road Shows 2 album— [which] has a lot of the tracks from his 80th birthday concert at the Beacon Theatre in New York, I was just aghast at how good he still is. There's a duet which is more of a duel with Ornette Coleman, who probably has the most extreme capacity to go beyond normal chord structures and tonal assumptions of any saxophonist. So Sonny just gets right out there with him.

Then when he plays beautiful music. Another one of the CDs I listened to today was called Old Flames. I played that one because it's a bunch of love songs that Sonny recorded in my first year as President. One of them, Duke Ellington's beautiful Prelude to a Kiss, Jimmy Heath arranged and conducted. . . . It's so beautiful.

And then I listened to 'The Freedom Suite,' which he recorded almost 54 years ago, in February of 1958. Apropos of what the former speaker said [referring to emcee Renee Fleming's earlier remark: 'He'd take a song you'd known all your life and in soaring solos of improvisation strip away the familiar and reveal new universes of wonder'], there are also, at the end of The Freedom Suite, three different takes of Till There Was You, and they're all different.

This man is a marvel. He was born with a strong body and a brilliant mind and a passion for jazz. He knew when he made jazz his mistress he would never be bored, but he would never conquer. And he decided he would spend his life trying again, every single day.

Some musicians that are really good grace us because they keep playing. Sonny Rollins's great gift to all of us, whether you know a lick about jazz or not, is that he keeps growing. And he still does.

A few weeks ago, physicists in Switzerland at the superconductor supercollider, the Hadron Supercollider, fired some subatomic particles called neutrinos through the mountains to a magnet in the Italian Alps, and it appeared that they arrived before they left. That is, it's the first known experiment in physics since Einstein propagated his theory of relativity where anything with matter and mass appeared to travel faster than the speed of light.

People who know a lot more about this than I do are still trying to absorb what this means and whether the experiment is accurate. But if it is, it may mean not just that we don't know where we are and what time it is—something I often feel when I'm in Washington—it may mean that there is after all a whole fourth dimension to reality.

Long before the scientists fired the neutrinos, Sonny Rollins believed there was another dimension to reality. In jazz music, his Mark VI Selmer tenor with his old Berg-Larsen mouthpiece is our superconducting supercollider. He has given us a gift, and reminded us that whatever hand we're given to play, we're supposed to play it to the very end and keep growing. Thank you, my friend.

“Bill's toast came after two hours spent sitting to Sonny's right at dinner and much conversing. Those present in the room, including myself, were dazzled and moved.

“Several weeks ago, on June 6, the day before the California primary, I went to see Bill Clinton speak at the Richmond Art Center, one of three Bay Area stops he made that day. About 300 people stood waiting in an outdoor patio area for two hours before he arrived (running late as usual!).

I had brought along a small print of a photo of Bill and Sonny Rollins deep in conversation that I had taken at the dinner in 2011 (see photo at top of this post). To the best of my knowledge, it's the only photo of the two of them together.

“Bringing the photo in an envelope was perhaps a far-fetched thing to do, since audience members rarely get close enough to any political person of that stature to talk to them, much less hand them something. But as luck would have it, after the event, Bill worked his way unhurriedly down the front line of the crowd, where I was standing. When he approached me, I handed him the envelope and told him there was a photo inside that he might appreciate.

“Upon seeing it, Bill's eyes opened wide: “Where did you get this?" “I took it!" “Is this for me?" “Yes it is!" Bill remarked somewhat wistfully that “it was a very happy evening for us"—meaning Hillary and himself. I enclosed my card with the photo in the envelope, and we shook hands.

“Two and a half weeks later, I received a call at home that I did not pick up, noticing that my caller i.d. said “Name Not Found" with the number 999-999-9999. But a message was left: someone from President Clinton's office was calling for him about “that photo you gave him." The caller left a number, which I called this past Monday.

“The guy who answered sounded official, on the verge of hostile. But as soon as I identified myself, he became so animated it cracked me up.

He told me President Clinton wanted to know if I had a larger version of the photo suitable for framing. I didn't, but I said I was happy to share the jpeg I shot on my BlackBerry. And so I did. I suspect it may soon be prominently displayed in the Clinton home or office." [Photo above of Sonny Rollins and Terri Hinte in 2006]

JazzWax clip: For some reason, Terri's email made me want to hear Sonny's Kids Know from Rollins Plays for Bird (1956)...