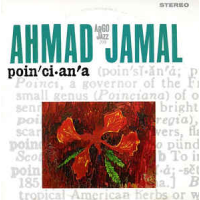 slideshow
By the very nature of the process of making the music, any tune can become a jazz tune. Some well-known standards, which I need not mention to further popularize them, are done so often that they are beyond tiresome. But jazz compositions stick with you for other reasons. The melody may be striking, or perhaps you’ve witnessed a performance that left you with goosebumps. The reasons will vary from listener to listener.

Just for fun, I started thinking the other night about my most favorite jazz tunes.

Here are the top 12—right now. The first five are ranked by personal preference. The others are close behind but not listed in any particular order.

“Poinciana”&#151Ahmad Jamal has been playing this 1930s tune, popularized in the 1952 film “Dreamboat,” since the mid-1950s. It became his become his signature tune thanks to a two-year ride on the top 10 charts after his 1958 recorded version was released in 1963 on his Live at the Pershingalbum. I’ve heard him perform it live many times – and never the same way twice. He always finds new things to explore and share.