Whalum to Romance the Web 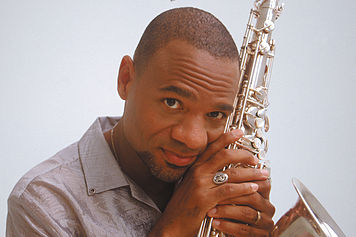 Portland, OR: Instead of dealing with crowded, overpriced restaurants on Valentines Day, stay home, light a few candles and let Grammy winning saxophonist Kirk Whalum set the mood for romance with a live two-hour concert streaming at 11:30 PM ET/8:30 PM PT in conjunction with the release of his 29th album, Romance Language. In partnership with Portland Prime, Hilton Portland & Executive Tower and BMW & MINI Portland, the February 14th webcast powered by StageIt and shared around the world via Whalum's Facebook page will include a backstage camera offering viewers a rare glimpse behind the scenes. On February 18th, there will be a rebroadcast of the Valentines Day concert at 8 PM ET/5 PM PT with a live question and answer session with Whalum.

Romance Language is available as the worlds first complete LiveAudio optimized album for JAMBOX by JAWBONE, a leader in personal mobile technology devices. LiveAudio allows music to be enjoyed in a 3D-like, surround sound experience from a single, small Bluetooth wireless speaker. During the live stream, Whalum will give away a JAMBOX and announce an exclusive JAMBOX offer as a gift to his fans.

Tickets for Whalums Valentine's Day Romance Language live concert stream and the February 18th rebroadcast can be purchased for $3.00 from StageIt.com or Facebook.com.