SOURCE: JAZZWAX BY MARC MYERS
May 3, 2019
Sign in to view read count 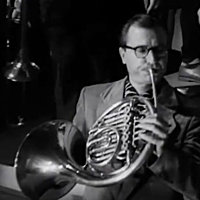 slideshow
There's only one film I know of that includes French hornist John Graas (right). As you may recall, I posted on Graas back on April 24. The film is Dementia, better known as Daughter of Horror. Completed in 1953, the film wasn't released until '55, thanks to nettlesome issues with Hollywood censors. The expressionist film was directed by John Parker and starred Adrienne Barrett. Comedian Shelly Berman can be seen as a stoned beatnik toward the end, and Marni Nixon did the overdubbed vocals.

What makes this black-and-white gem so terrifying is its complete lack of dialogue (that's one way to hold down the budget!). The music by avant-garde composer George Antheil, sound effects and creepy lighting (with eerie narration added in places later by Ed McMahon) all combine to raise suspense and neck hairs. Sort of Ed Wood meets Fritz Lang.

Of note for JazzWax readers is that Shorty Rogers and His Giants perform Wig Alley (a.k.a. Morpo) in a club scene toward the end. It's one of the only films of this great '53 band (minus Art Pepper and Shelly Manne). The Giants here include Milt Bernhart on trombone, John Graas on French horn, Shorty Rogers on trumpet, Jimmy Giuffre on tenor sax and Howard Rumsey on bass. The pianist is Frank Patchen, the tuba player (unseen) is likely Gene Englund and the conga player is Rodney Evans Bacon, who was the artist who did the paintings at The Lighthouse in Hermosa Beach. The drummer on screen is a relative of someone involved in the film, but it was Shelly Manne on the soundtrack.

One of the comments at YouTube made me laugh out loud. Someone wrote: “Man, did people really behave like this at LA jazz clubs in the 50s? Everybody acts like they're on crystal meth, or something." The answer is, “Yes, yes they did."

JazzWax clip: Here's just the club scene. Interestingly, Rogers hadn't grown a goatee yet and was still playing trumpet rather than flugelhorn...

Here's Dementia (a.k.a. Daughter of Horror), complete. Shorty Rogers and His Giants start at 43:38...

And here's the trailer...