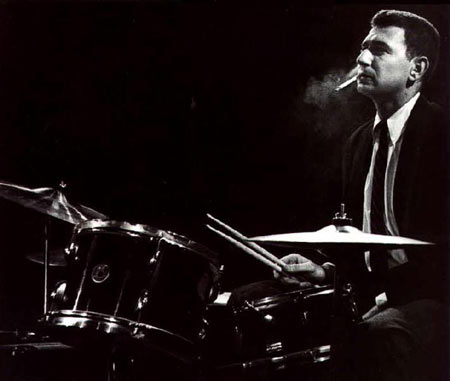 slideshow
From 1960 to 1972 in Hollywood, drummer Shelly Manne operated Shelly’s Manne Hole, one of the great jazz clubs in the world. It was headquarters for his quintet known as Shelly Manne And His Men, which over the years included many of the era’s premier players, among them Charlie Mariano, Bill Holman, Richie Kamuca, Conte Candoli, Joe Gordon, Stu Williamson, Leroy Vinnegar, Russ Freeman, Victor Feldman and Monty Budwig.

Now and then, though, Manne brought in a few friends for short-term appearances at the club. One night in 1970, his all-star quartet du jour consisted of tenor saxophonist Bob Cooper, pianist Hampton Hawes and bassist Ray Brown. They played a blues in what seems to be A-flat (although I’m not sure I trust the pitch of the film sound track), and followed with “Stella By Starlight.” Then came ”Milestones,” which Manne kicked off at a tempo about as fast as it’s possible for musicians to play coherently. Brown gives Manne a grin that seems to say, “You devil,” but the four manage without difficulty.

Shelly was forced to close the Manne Hole because the music was causing problems for Wally Heider’s recording studio next door. He reopened for a time in L.A.’s Wilshire section, but the club lasted less than a year at the new location. Manne thrived until shortly before his death in 1984, always in demand, one of the most admired drummers and bandleaders in the history of the music.