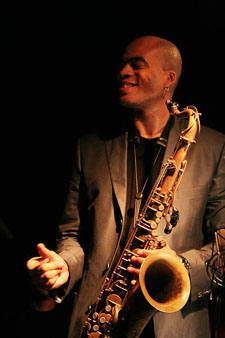 Bridgeport native and New York-based jazz vocalist Giacomo Gates, whose latest CD “Miles Tones” celebrates the music of Miles Davis, is also featured in a special concert on Friday, August 16, at Firehouse 12, 7:00 – 9:00 pm. Tickets for that event are $30.

Jazz Haven, which has produced the festival since 2008, seeks to broaden this successful expansion to include more venues, live performances in Temple Plaza, street performers and family-oriented events and youth activities. In an effort to restore the tradition of New Haven jazz festivals of decades ago when artists such as Ray Charles performed on the New Haven Green, Jazz Haven created Jazz Week to serve as an important and exciting community-building vehicle in this city.

“Breaking new ground has always been very exciting to me, ” says Doug Morrill, founder of Jazz Haven. “We want to build on the positive momentum from last year’s expanded festival and continue to present the true diversity of jazz featuring some of the best international stars, along with our own homegrown talent. Our state has given the music many jazz stars, from Horace Silver to Brad Mehldau, and we want to show that we still have more amazing jazz musicians right here.”

For Jazz Haven President/Director, Craig O’Connell, the jazz festival “showcases the great swinging diversity of the music free of charge to the public, on the bandstand, and more importantly in the classroom. Jazz, since its inception has always been multicultural, and many aspects of it, especially the emphasis on teamwork and improvisation, can be adapted and adopted in many educational curriculums for our youth.”

In addition to the music, the New Haven Jazz Festival continues its annual celebration of the visual arts. The works of Hartford-born visual artist Andres Chaparro, known for his jazz-influenced expressionist pieces, will be exhibited throughout the area during Jazz Week.

Described by allaboutjazz.com as “a talented youngster capable of long, flowing lines, noteworthy creativity, and a broad range of expressiveness, “ tenor/soprano saxophonist Wayne Escoffrey is a veteran of New York jazz scene, and is one of the compelling and creative musicians of his generation. He was born on February 23, 1975, in North London, England to a Jamaican father and a loving mother, who immigrated to the United States when Escoffery was eight years old, and settled down in Hartford. At age 11, Escoffery joined The New Haven Trinity Boys Choir and began took saxophone lessons from Malcolm Dickinson. At sixteen, he left the choir and began a more intensive study of the saxophone, by attending Jazzmobile in New York City, the Neighborhood Music School in New Haven, and the ACES Educational Center for the Arts. Escoffery honed his craft in several local venues, including Rudy’s Bar, and during his senior year in high School, he attended the Artists Collective, Inc. in Hartford, Connecticut.

Escoffrey also studied with legendary alto saxophonist Jackie McLean, founder of the jazz program at The Hartt School of Music, where he graduated summa cum laude with a Bachelor’s degree in Jazz Performance in 1997. He attended the Thelonious Monk Institute, and earned a Masters Degree The New England Conservatory of Music in 1999. Escoffrey’s transcontinental odyssey made a strong impression on his art as he overcame adversity through dedication and inspiration. He has had a number of prominent gigs with some of today’s brightest jazz stars, including Ben Riley’s Monk Legacy, Tom Harrell, Eric Reed, Lonnie Plaxico, and his wife, singer Carolyn Leonhart. His recordings as a leader include Time Change (Nagel Hayer, 2001), Intuition (Nagel Hayer, 2004), Veneration: Live at Smoke Savant (Nagel Hayer, 2007) and If Dreams Come True (Nagel Hayer, 2007), Hopes and Dreams (Savant, 2009), Uptown (Posi–Tone), Tides of Yesterday (Savant Records), and his latest CD, The Only Son of One (Sunnyside, 2012).

The Hartford-born Curtis Brothers – pianist Zaccai (December 25, 1981) and bassist Luques (August 17, 1983) – are the latest in a long line of jazzy siblings, including the Adderely, Heath, Montgomery, Brecker and Marsalis brothers. As 21st Century improvisers they speak the languages of North American and Latin jazz with equal fluency. Zaccai started studying jazz as a sophomore at Greater Hartford Academy of the Performing Arts, studying with Dave Santoro and Paul Brown. That year he won the Charlie Palmieri Memorial Scholarship a full scholarship (funded by Tito Puente) to attend the Harbor Conservatory in New York City and studied with Oriente Lopez and Alfredo Valdez. As a senior in high school, he was selected as the small combo pianist for the National High School Grammy Band.

Zaccai studied at The New England Conservatory of Music, where with Danilo Perez, Jerry Bergonzi, Steve Lacy and Michael Cain. In his senior year at NEC, Zaccai was invited by New Orleans-based alto saxophonist Donald Harrison to be a member of his quintet and has performed with Harrison at jazz festivals in Spain, Holland, Germany, Switzerland and New Orleans among other venues. He has also performed with the Christian Scott Sextet in Boston and New Orleans. Luques studied bass after taking piano and percussion lessons. He studied at the Greater Hartford Academy of Performing Arts, Artist Collective, and Guakia with Dave Santoro, Volcan Orham, Nat Reeves, Paul Brown, and others. After graduating high school, he earned a full scholarship to the prestigious Berklee College of Music, and studied with John Lockwood and Ron Mahdi, and worked with Gary Burton, Ralph Peterson, Donald Harrison, Christian Scott, and Francisco Mela. He also formed a group with his brother Zacchai called Insight. Since moving to New York, Luques has worked with Eddie Palmieri, Brian Lynch, Ralph Peterson, Christian Scott, Sean Jones, Gary Burton, Stefon Harris, Donald Harrison, Etienne Charles, Albert Rivera, Elio Villafranca, Francisco Mela, and others. Luques and Zacchai formed The Curtis Brothers group in 2001. In 2005 they were selected by the legendary percussionist Ray Barretto and pianist Hilton Ruiz, to tour in the U.S. State Department’s American Music Abroad Jazz Ambassadors program, where performed in India, Bangladesh, Sri Lanka and the Maldives. Their first CD, A Genesis (2007), followed by Blood. Spirit. Land. Water. Freedom (Truth Revolution 2009) and Completion of Proof (Truth Revolution, 2012), featuring master drummer Ralph Peterson, was released in 2012. Their latest recording, Nuestro Tango (Truth Revolution, forthcoming), features Argentine vocalist Natalie Fernandez, and their jazz-tinged take on tango. Their music incorporates elements of the Cuban clave with Afro-folkloric rhythms and musical genres from Puerto Rico, and Brazil.

A child prodigy who grew up in a musical household, Gil Hawkins studied drums with local drummer Victor Smith, Norwalk drum legend Gil Hawkins is a master of rhythm who masterfully speaks the musical languages of jazz, blues, and R&B with flowing and funky fluency. He played in various groups in Connecticut, and worked with the great blues/R&B singer Esther Phillips when she recorded with CTI records in the seventies, also worked with the group’s Inside Out and Suite. Hawkins also opened for Dizzy Gillespie and played with actor/keyboardist Vincent Lyn. He also worked with the jazz fusion groups, the Anuta & George Band, ” Cobalt, and Steve Husted’s Big Five Bass: Jazz for the New Millennium, and with the Hot Dallas Night blues trio. His current group, The Gil Hawkins Collective features Josh Bruneau trumpet, Kris Jenson sax, Rich Goldstein guitar, Chris D’Angeles bass and Adrian Tramontano percussion.

Consisting of the best of New Haven’s young jazz-trained artists, these musicians and future legends in the making are the shape of jazz to come.

A formidable and fluid jazz vocalist for whom Eddie Jefferson and Jon Hendricks are major influences, Bridgeport, CT native Giacomo Gates, is arguably of the most powerful and profound vocalise artists on the scene today. He emerged on the New York jazz at the age of forty in 1990, after years of work in Alaska as a truck driver and construction worker. In 1995, Jon Hendricks invited him on stage to sing, and Gates also worked with the great singer/pianist Andy Bey and also worked with Lou Donaldson, Freddie Hubbard, Richie Cole, Randy Brecker, Jon Faddis and Hilton Ruiz. Gates has recorded five albums, and his two latest releases, Songs of Gil Scott-Heron-The Revolution Will Be Jazz and Miles Tones (a tribute to Miles Davis) are critically-acclaimed by jazz critics and are in heavy rotation at major jazz radio stations. Gates was named 2013 Best Male Vocalist by the Jazz Journalists Association in June.

Since its inception in 1996, Jazz Haven, Inc. has promoted the culture of Jazz through unique collaborations with artists, organizations, schools and other groups. The skill and passion that its Board members have demonstrated for the culture of jazz encourages a growing network of organizations and programs that help promote jazz education as well as jazz as an art form. With its beginnings as a series of performances at Artspace, Jazz Haven incorporated programming — always in collaboration with other organizations — that has included master classes with visiting artists, concerts featuring internationally and locally known musicians, including the New Haven Jazz Festivals since 2008 on the New Haven Green, tributes to late jazz masters, benefits for not-for-profit organizations, consultation for programming and technical support of other organizations with similar missions, and education. Jazz Haven has organized and presented Jazz in the parks and other venues and presented educational programs in the New Haven Public Schools. Artists who perform at the New Haven Jazz Festivals also give workshops, master classes and performances for students at the Neighborhood Music School Summer Jazz Program.

The mission of the Department of Arts, Culture and Tourism is to improve the quality of life in New Haven and to support the economic development of the City by assisting, promoting and encouraging artists, arts and cultural organizations and events in New Haven. It also serves as the steward for the municipal collection of public art. The organization supports a wealth of neighborhood activities through the Mayor’s Community Arts Grants Program, enhances municipal buildings and schools with public works of art through its Percent for Art Program and produces community events, such as the Holiday Tree Lighting on the Green.