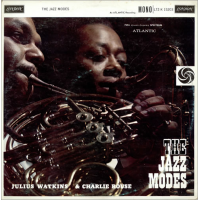 slideshow
Yesterday I posted about the Jazz Lab, a little-known, short-lived East Coast jazz quintet co-led by Gigi Gryce and Donald Byrd in 1957. Today, continuing with my series on jazz supergroups of the mid-1950s, I'm turning to Les Jazz Modes, a little known quintet co-led by French hornist Julius Watkins and tenor saxophonist Charlie Rouse that began a year earlier than the Jazz Lab and lasted a year later. Much of the original material the group recorded was composed and arranged by Watkins.

The group's longevity was likely a result of its relationship with Dawn Records. Three of the group's five albums were on the label. The final two were on Atlantic. Dawn Records began in the early 1950s as an R&B label but soon went dormant. Then in 1956, Dawn was reactivated and repositioned as a jazz label owned by Sidney Siegel with offices at 36 W. 60th St. in New York. Siegel is perhaps best known for pioneering Latin music in the 1940s and '50s on his Seeco label, which he started in 1944. By 1953, Seeco was No. 2 behind only RCA in the growing Latin music market. [Photo above of Stanley Siegel and Latin singing star Celia Cruz]

Dawn's shift to jazz came as Siegel was building bridges with European and South American record labels that were looking for 12-inch jazz titles. For example, Billboard in 1956 reported that Siegel had hammered out an agreement with France's Vogue label to make his Dawn jazz recordings available in exchange for Vogue's jazz recordings by American expatriates, including Jimmy Raney and Lucky Thompson. Siegel spent a great deal of time traveling, with Billboard reporting him in Spain, France and England with plans to be in Rio de Janeiro and Buenos Aires. Billboard also mentioned that he had just acquired the rights to distribute Dot Records in all of South America.

Siegel's Vogue connection may help explain Les Jazz Modes' French title. It certainly would have helped the label with sales of Les Jazz Modes in France and Belgium. While the personnel in the quintet's rhythm section changed over the course of its five albums, Gildo Mahones was a constant on piano. The group's five albums include Jazzville, Les Jazz Modes, Mood in Scarlet (all recorded in 1956), The Jazz Modes (1957) and The Most Happy Fella (1957 and '58). About 20 jazz albums were produced in all by Dawn until 1958. By the fall of '58, Rouse was part of Thelonious Monk's quartet while Watkins was in the challenging orchestras led by Gil Evans and Johnny Richards.

Les Jazz Modes' output was a bit tamer than the Jazz Lab, largely because of Watkins' French horn, a valve instrument that tends to play in staccato when improvising. As a result, Watkins often sounded like a muffled second piano with Rouse handling much of the flair and daring on solos.

Among the more interesting albums are Les Jazz Modes, with Paul Chambers and Oscar Pettiford on bass, and The Most Happy Fella, which featured music from the 1956 Broadway musical interpreted by the quintet.