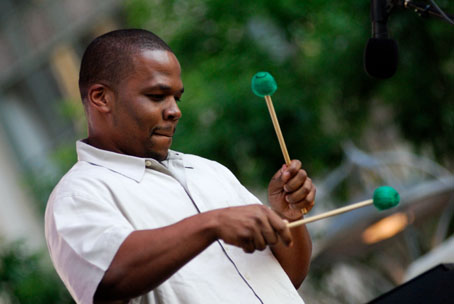 slideshow
Vibes player Warren Wolf was the Naples Philharmonic Jazz Orchestra's special guest on Wednesday, March 28 in the sextet's 2017-18 concert series at Artis-Naples' Daniels Pavilion. His performance was an artful showcase of his instrument's wide range of shimmering possibilities- given the right hands and musical approach. The mallets were indeed in the right hands this fine night.

Wolf is blessed with a fertile musical mind and a mesmerizing technique. Indeed, he imbued each solo with something fresh and personal. The material included one original- “Soul Sister," which was so funky it sounded like something from Horace Silver, a wide range of classic bebop tunes, a bit of bossa nova and couple of classics from the Great American Songbook.

The band's treatment of bossa nova master Antonio Carlos Jobim's “Wave," with Del Gatto shifting to flute, revealed the softer side in Wolf's playing. “Round Midnight," one of two Thelonious Monk tunes performed back-to-back, was a showcase for the Baltimore-native's style. He'll add surprise accents to enhance the melody or underscore parts of the melody- or he'll let the music breathe with bits of silence in places you least expect.

The evening's finest moments included Wolf and Mauldin's vibes and bass duet on “All the Things You Are," and the closing pair of burning bop tunes with the full band: Dizzy Gillespie's “Bebop" and, quite appropriately, vibes player Milt Jackson's “Bag's Groove."

Wolf, 38, is best known for his vibes playing, but the busy musician is a formidable multi-instrumentalist. He plays plays the drums in alto saxophonist Tia Fuller's group, and plays piano in singer Rachael Price's band. You could see Wolf sitting back on his stool, his head cocked, reveling in Stawski's exquisite keyboard solos.