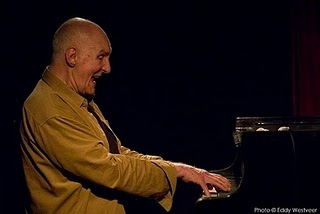 slideshow
Pianist Walter Norris died this week at his home in Berlin. He was two months short of his 80th birthday. Because of his early recording with Ornette Coleman and later experimental work, he is often described as associated primarily with free jazz, but Norris's stylistic range was virtually unlimited. He was born in Little Rock, Arkansas and first received substantial notice in the 1950s in Los Angeles when he recorded with Jack Sheldon and was the pianist on Coleman's first album. After he moved to New York in 1960, Norris, guitarist Billy Bean and bassist Hal Gaylor formed a trio called The Trio. They made one highly regarded album. In the mid-'70s he replaced Roland Hanna in the Thad Jones-Mel Lewis Jazz Orchestra, recorded with baritone saxophonist Pepper Adams and later worked briefly with Charles Mingus. He moved to Germany in 1977. In the 1990s, he recorded a series of albums for Concord, from solo piano early in the Maybeck series to a quartet that included the adventurous tenor saxophonist Joe Henderson. This page shows several of Norris's albums.

In a 1975 New Yorker profile of Norris, Whitney Balliet summed up aspects of the mastery that made the pianist an idol of aware listeners and musicians, even though he never received wide public notice.

His touch is even and light. He uses his considerable technique beautifully; his arpeggios, which whip and coil, have logic and continuity; his double-time dashes are parenthetical and light up what they interrupt; his long single note passages continually pause and breathe; no tempo rattles the clarity of his articulation, which has a private, singing quality.

Here is a track from Norris's 1995 duo recording with bassist George Mraz.

A documentary film about Norris, directed by Chuck Dodson, is officially unreleased but being circulated by the director as a pre-release DVD without standard packaging.