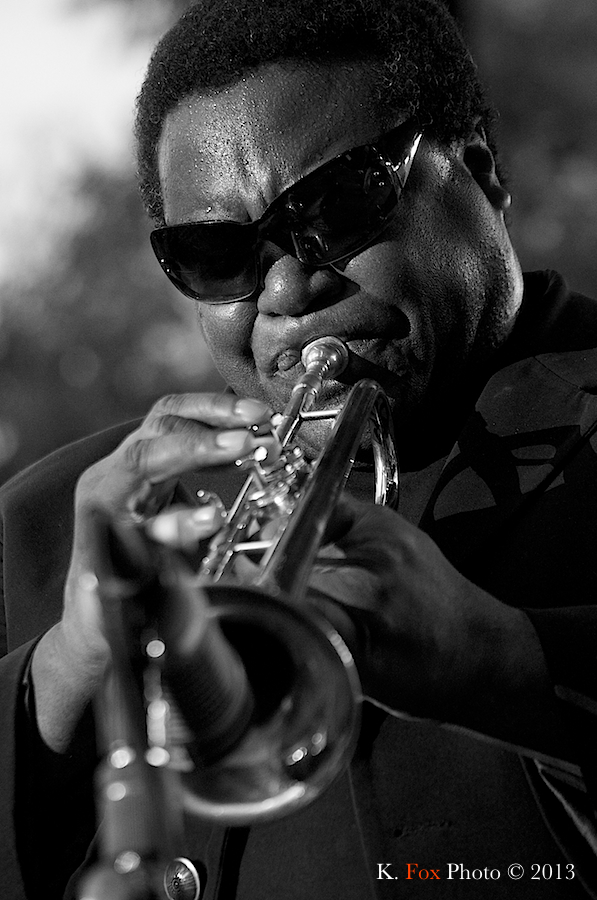 slideshow
By Reed I. Hadley

Miles Davis hand-picked Wallace Roney to perform by his side at the Montreux Jazz Festival and on May 16, 2013, Wallace, along with Gary Bartz, Monty Alexander and others, performed the Miles Davis classic “If I Were a Bell." The occasion was a dedication of Miles’ former brownstone into the NY Historical Preservation Landmark collection.

As part of ”Backstage: Series” programming for jarisreedgroup.org, I recently witnessed Roney perform the same piece at The Side Door Jazz Club, but this time with his young firebrands, whom he is grooming and refers to as “the world’s next super stars of the future” much like Miles did with his second hottest and youngest quartet. Owner Ken Kitchings, said about Roney “...Old Lyme, CT will never be the same” after he heard the first set of the second night of a two-night session at his newest spot just off Interstate 95.Wallace instantly served up a torrid-paced entree with a potpourri of his original works, as well as classics composed by Mingus and Miles. The crowd devoured it all. After the first set, like a proud papa, he introduced the band by stating “…these guys are the future superstars in the jazz world”. They are Rashaan Carter - Bass (no relation to bassist Ron Carter), Victor Gould - Piano , Ben Solomon -Tenor Sax and Kush Aberdey - Drums(who like Tony Williams was to Miles, has been with Wallace since age 16). Roney, (who took lessons from NEA Jazz Master Trumpeters Clark Terry, Dizzy Gillespie and studied under “Sir Miles”) demonstrates the influences of his idols with his presentation of sparse lines and carefully placed notes. He has also established himself as a statesman. His band's opinion of their experience with Roney is as Victor Gould stated “…we’re enjoying being students in the “School of Roney".Wallace’s quintet took the first night’s crowd under their spell. The set opened with “Home” a Roney original, followed by “Utopia” (an original Wayne Shorter composition, never before recorded until recently by Roney) “Gaslight” (a Duke Jordan tune) followed to the crowds delight. They segued into Miles’ signature “My Funny Valentine," which displayed Roney's glowing solo and “Shadow Dance," another Roney work, which showcased the depth of his passion in writing a stirring piece). After a short break the band returned to the stage opening with “If I Were a Bell”. This tune was popularized by “The Cosby Show" - anytime the doorbell rang. Next up was a Buster Williams' tune titled “Christine." The set closed with “Northern Lights," a third Roney original.

On night two, the cats vamped, stretching themselves to their limits in the room.

Plus, a very touching treat was provided for him as Roney’s former workshop leader Martin Piecuch (now a renowned classical maestro and “Jazzical” woodwind specialist) was in the audience to witness his former student, literally, wowing the crowd. Along with his wife Elizabeth Falk, (theater and stage director) Maestro Piecuch enjoyed the show stating “...though I have followed his career, I have not seen Wallace since he and his brother Antoine were in my workshop in Virginia. He was a precocious one even then, playing beyond his years… “Having performed in Russia over eighteen times, Martin knows well of Wallace’s recent experiences in Moscow. Needless to say, he was blown away by Roney's artistry and that of the band of young musicians (all of whom are in their 20's).

The audience was (as several testimonials confirmed); extremely excited about having this style of music coming regularly into their town. This night’s musical program featured most of the same selections, but more “jam” was put on it. This crowd was more youthful, thus providing more energy to the already grooving, jazz crowd. I even recognized a few familiar faces from earlier this month (Sergio Salvatore and Christos Rafalides show)… So, repeaters are catching on to this new haunt.

Wallace Roney calls The Side Door Jazz Club “...a welcome addition to the east coast scene." We agree.