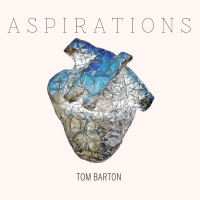 Aspirations was recorded in early 2014 after over $9,000 was raised by fans on crowdfunding platform Pozible.

Bio Tom graduated from the Victorian College of the Arts with a Bachelor of Music Performance (Honours) in Jazz Improvisation in 2010. In 2013, Tom was invited to study a Master of Jazz (Voice) at the Manhattan School of Music in New York City.

Tom has been awarded artistic grants including the Australia Council for the Arts Artstart ($10,000), and Skills and Development ($5,000) which involved musical mentorships in New York City.