SOURCE: KARI-ON PRODUCTIONS
May 27, 2008
Sign in to view read count 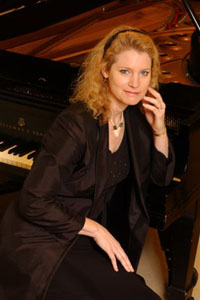 slideshow
Jazz vocalist Monica Hatch with pianist Pamela Hines will perform the 7:00pm show on Friday, May 30th, at the Acton Jazz Cafe in Acton, MA.

Hatch has a lyrical jazz style and improv skills to make every standard fresh.

Born and raised in Connecticut in a family of nine children, Monica Hatch was drawn to both classical music and jazz from the beginning of her musical journey. Influenced by her parents love of music (her father was a pianist and fiddler, her mother was a soprano in the church choir), she listened to her fathers recordings of Meade Lux Lewis, Oscar Peterson and Dave Brubeck while learning the music of Handel, Vivaldi, Schubert and more. Monica was also introduced to many other jazz legends during her teen years including Ella Fitzgerald, Sarah Vaughan, Mary Lou Williams, Paul Desmond, Wes Montgomery, Herbie Hancock, Freddie Hubbard and more. At the same time she began studying piano, flute and recorder and sang solos in school choruses and played with the instrumental ensembles. Her mother urged Monica to join the church choir at the age of 12 where her singing abilities were quickly recognized as she sang solos for weddings and church services. After High School, a field trip to see Madame Butterfly at the New York City Opera with her first voice teacher, Jack Litten, inspired Monica to pursue her singing career more seriously. Litten prepared Monica for her auditions having her sing Mozarts Ach ich fuhls, Handels Rejoice Greatly and Scarlattis Le Violette. She was accepted to several prestigious conservatories including Carnegie Mellon, The Hartt School, Ithaca College and Juilliard.

Monica ultimately chose Juilliard and studied with the renowned operatic soprano, Eleanor Steber. She completed her undergraduate studies at The Eastman School of Music where she was the soprano soloist in a performance of Carl Orffs Carmina Burana with the Eastman Choral. Additionally, although she was a classical voice major at Eastman, she was often invited to perform with the Eastman jazz ensembles and studio orchestra and eventually won the DownBeat Jazz Vocal Soloist award in the college division. Monica continued her musical training at The New England Conservatory of Music where she studied with dramatic soprano, Donna Roll and received a Master of Music degree in Vocal Performance.

As a sought after soprano, she has been a soloist with The Massachusetts Symphony, The Thayer Symphony, The Concord Symphony, Cathedral of St. Pauls Festival Orchestra, The Bach Society of Worcester, The Worcester Chorus and dozens of church choirs. Her oratorio performances include, Faures Requiem, Orffs Carmina Burana, Vivaldis Gloria, Bachs Magnificat, Mozarts Requiem, Handels Messiah, Schuberts Mass in G. Being described as particularly outstanding by the Boston Globe in her role of the Duke Ellington Sacred Concerts at the Boston Globe Jazz and Blues Festivals in 1998 and 1999, her critically acclaimed performances led to her becoming the soprano of choice for many subsequent productions of this work in New England.