SOURCE: ALL ABOUT JAZZ PUBLICITY
August 9, 2008
Sign in to view read count 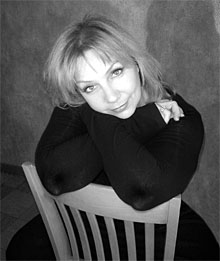 Linda Ciofalo's repertoire ranges from such diverse sources as bluesman John Lee Hooker to Rodgers and Hammerstein's Broadway. Her voice can be both hard-hitting and gutsy, or lend itself to pure romance. At an early age Ciofalo was accepted to New York's High School of Music and Art but due to parental disapproval of her musical aspirations, she was not allowed to attend. Subsequently, in later years she attended evening classes for classical vocal technique and musical theater at Julliard. Inspired by a televised performance of Sarah Vaughn, Ciofalo's interest in vocal jazz was piqued and in the mid-80s she auditioned among 300 singers to procure the featured vocalist spot in The Big Band Association's jazz orchestra.

In 1999, she recorded a CD of standards, jazz-pop and original works. Take the High Road, took on a life of it's own and brought her to the attention of many New York jazz fans in addition to receiving world- wide airplay. It also led to performances at major New York clubs such as the Blue Note, Iridium, the 55 Bar, Old Westbury Gardens and the Long Island Distinguished Artists series. The recipient of numerous NYFA and LIAC grants, Ciofalo also produces many of her own concerts. In addition she has shared the stage with jazz legends -- vocalist Mark Murphy and guitarist Les Paul to name a few. Recently she was recruited by the Lincoln Center Institute/Tilles Center as a music- teaching artist, working in the New York State public school system, and is the head of the jazz and pop vocal program for the Long Island High School for the Arts on Long Island. While Take The High Road helped introduce Linda Ciofalo's singing to listeners far beyond the New York City limits, Ms. Ciofalo's latest CD Sun Set -- an engaging set of 12 tracks inspired by the sun --further displays her versatility and diverse musical style. Joined by an all-star band of top-rated New York musicians, including pianist John DiMartino, bassist Marcus McLaurine, drummer Matt Wilson, guitarist John Hart and saxophonist Joel Frahm, the disc features a wide variety of material including inventive versions of Stevie Wonder's Blame It On The Sun, Here Comes The Sun, Comes Love, Madonna's La Isla Bonita and the standard Midnight Sun plus duet pieces in which she interacts separately with drums, bass and piano.

Sun Set was listed as a 2007 favorite CD on JazzPolice.com and received honorable mention on AllAboutJazz.com. has been receiving glowing reviews, healthy airplay and international recognition.

The New York-based vocalist recently returned from a very successful West Coast tour, where she performed with stellar musicians including the legendary drummer Roy McCurdy. Many turned out to hear Ms. Ciofalo, who delighted audiences and club owners alike with her supple voice, warm charm and sharp wit. She's been invited to return to all of the venues for future performances.

“...she is blessed with a voice as warm, bright and shimmering as a smog-free country morning." --Christopher Loudon, JazzTimes

“Matt Wilson, the drummer on the CD, suggested that I would like Ciofalo. I do. She is adventurous, but not to the point of disrespecting the material. She sings in tune, uses time play in her phrasing without losing rhythmic consistency and has a light, creamy voice that now and then drops to surprising depth. She is willing to take risks--for instance, singing with only drums or bass--and makes it clear that she enjoys what she does Doug Ramsey, Rifftides - Arts Journal