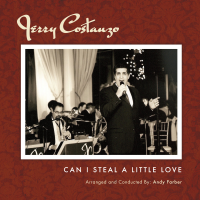 Mr. Costanzo, well known for his smooth song stylings, updates the song “Can I Steal A Little Love” with a new arrangement by Andy Farber and backed by a 16-piece Big Band, adding a fresh vocal interpretation to Phil Tumienello’s lyrics.

Although Jerry has the support of a full big band, through the wonder of multi-track recording, only 4 musicians actually played on the session. “Can I Steal A Little Love” showcases the fine talents of Andy Farber on all Saxophones and Piano, Brian Pereschi all Trumpets, Andrew Williams all Trombones and String Bass, with Jonathan Mele on Drums.

“I recorded this song a few years ago to be used for a film, but unfortunately the project was cancelled so the tune was never used.” says Mr. Costanzo. “And although it’s not on an album of mine, I always wanted to release it as a single. It came out great and we had a blast recording it.”

“Can I Steal A Little Love” was originally recorded by Frank Sinatra in 1956, with arrangement by Nelson Riddle. It was recently featured in the film “The Cooler”.

Mr. Costanzo’s latest CD, “Can’t We Be Friends?” from Daywood Drive Records, includes favorite standards such as “East of the Sun”, “Perhaps, Perhaps, Perhaps”, and “Penthouse Serenade.” All were featured on broadcast and internet radio nationwide, as well as New York’s own WHLI, where he was spotlighted as “Artist of the Week.”

With his nice ‘n easy swingin’ style, he continues to bring the American Songbook into the 21st Century. Jerry Costanzo and his trio will be appearing at The Kitano Jazz Lounge, Thursday, May 31, with sets at 8pm and 10pm. For more information, visit kitano.com

“Costanzo’s ear is precise, his voice has a remarkable blend of velvet and timbre which adds a relaxed, convincing ease and a sense of humor to the exchange of vocals and band. His timing is natural. The songs live at their height behind these gifted interpretations. Happy to be featuring the music.” —Jeff Thomas, WUSB Stony Brook University