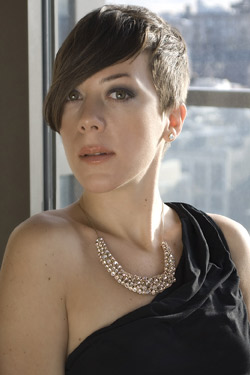 Hailed by jazz legend Herbie Hancock as “a singer with a deep, almost magical connection to the music” Parlato has been attracting fans and critics alike since winning the 2004 Thelonious Monk International Jazz Vocals Competition. A Los Angeles native, Parlato released her debut self-titled album to critical acclaim in 2005. Billboard magazine called her follow-up second release, “In a Dream,” “the most alluring jazz vocal album of 2009.” It also turned up on numerous “best of” year-end polls, including those for Jazz Times, the Boston Globe, the Village Voice and NPR.

“Gretchen is one of the most unique, provocative and hip singers on the scene today,” said Dane Richeson, professor of music in Lawrence’s jazz studies department. “She pulls together great musicians to work with her in her band and I promise hers will be a great concert.”

Beyond her individual success, Parlato’s intriguing voice and rhythmically agile phrasing has earned her collaborations on more than 50 recordings with artists ranging from Terence Blanchard and Kenny Barron to Terri Lynn Carrington and Esperanza Spalding.

Parlato describes her latest musical interests as a search for “finding not only a higher, but a deeper level and connection in music. And this seems to be done by shedding everything and getting right to the heart and core."