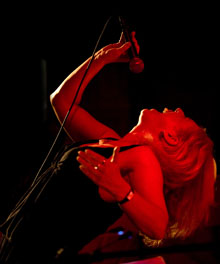 slideshow
Singer Barb Jungr is on a roll at present. In March 2009 she and accompanist Simon Wallace played for the first time at Caf Carlyle, in New York City, presenting a show entitled “The Men I Love" which featured songs by the likes of Bob Dylan, Leonard Cohen, Bruce Springsteen, Todd Rundgren and Neil Diamond. The show received rave reviews and was voted one of the year's best by Time Out New York. The songs from the show formed the basis for the album The Men I Love: The New American Songbook (Naim, 2010) released to great acclaim. By then, Jungr was opening a new show, “River," at Caf Carlyle to further rave reviews. With concerts lined up throughout the year--invariably well attended and well received--plus other projects coming to fruition, the future looks bright for Jungr.

Veteran AAJ Contributor and London Correspondent John Eyles spoke with Jungr at great length recently, about bringing disparate music into the jazz sphere, the deeper significance of some of the songs she interprets, and much, much more.