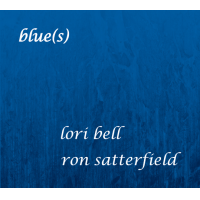 Now in the third decade of her acclaimed career, blue(s) is Bell's 10th album overall, and the follow-up to her critically-acclaimed release, Brooklyn Dreaming, which won a Global Music Award for “Outstanding Achievement,” while also garnering a “Best Jazz Album” nomination from the San Diego Music Awards and “Best of 2016” recognition by DownBeat and Huffington Post.

In the modern cynical world, the tired cliché that “familiarity breeds contempt" often goes unquestioned, though in the hands of master musicians, the offspring of familiarity can also include surprise, audacity, and deep intuitive communication. Bell and multi-instrumentalist Ron Satterfield have been nurturing such dialogue for nearly 25 years, and the results on blue(s) could hardly be clearer. Recorded direct to two-track, and produced by Bell, five of the nine cuts were nailed on the first take, indicative of the kind of magical spontaneity that only comes from listening at the highest level.

From the opening strains of “Bell’s Blues,” it’s evident that something special is going on. Bell exhibits a gorgeous, liquid tone and luxuriant vibrato over the manic comping and wickedly swinging bass line of Satterfield, which elevates his partner into a wild solo that crests with a snippet of the Sonny Rollins classic “Blue Seven.” Out of nowhere, he cranks up the intensity with ebullient scatting.

Bell soars into the ether on “Blue in Green,” guided by Satterfield’s relentlessly supportive bossa comping and languid Al Jarreau-ish phrasing. Joni Mitchell’s “Blue,” features Bell’s remarkably zaftig alto flute and Satterfield’s open-string arpeggios in support of his somber vocal acumen. “Blue Monk,” is reimagined in 6/8 and Satterfield’s comping toggles metric precision with a truly organic pulse. Throughout the spellbinding journey, Satterfield takes no guitar solos, yet his imprint could hardly be more indelible. He is a veritable groove machine, a true “rhythm guitarist.” There is a sense of joy as each musician scribes tight orbits around the other that is impossible to ignore. It all comes together on Bell’s “Blue Butterflies,” with a head in 11/8 and solos in 6/8 dissolving into a cinematically evocative tag.

McCoy Tyner’s “Blues on the Corner,” features some of Bell’s most dramatic improvising on the disc and a Satterfield scat episode that shifts effortlessly from Latin to blues and back again. He opens “All Blues,” with expansive vocalese and a smok’in bass vamp over which Bell responds with deft flutter tongued phraseology. The album concludes with another striking Bell original, “Istanblue,” gliding over Satterfield’s evocative open-string voicings and Lori’s richly detailed woodwind mastery—resulting in a truly intoxicating mélange and brilliant summary.

“One of the finest virtuoso flutists of our time.”—Latin Jazz Network

“Bell is a talent on whom to keep one's ears trained.”—Los Angeles Times

“Sophisticated rhythmic sensibility and a refined sense of dynamics. An improvisational shapeshifter.”—DownBeat

“One cannot help but be very intrigued by Lori's technical and improvisational ease. She is a remarkable flautist.”—Jazz Improv Magazine