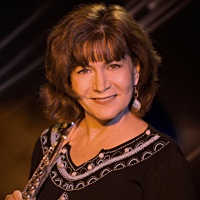 On February 25th 2018 virtuoso flutist, composer/arranger, and educator, Lori Bell will perform a CD release concert of blue(s), a 9-track opus including straight ahead blues and songs with ‘blue’ in the titles highlighting its rich color, lingering mood and resplendent hue.

Now in the third decade of her acclaimed career, blue(s) is Bell's 10th album overall, and the follow-up to her critically-acclaimed release, Brooklyn Dreaming, which won a Global Music Award for “Outstanding Achievement,” while also garnering a “Best Jazz Album” nomination from the San Diego Music Awards and “Best of 2016” recognition by DownBeat and Huffington Post.

In the modern cynical world, the tired cliché that “familiarity breeds contempt" often goes unquestioned, though in the hands of master musicians, the offspring of familiarity can also include surprise, audacity, and deep intuitive communication. Bell and guitarist/vocalist Ron Satterfield have been nurturing such dialogue for nearly 25 years, and the results on blue(s) could hardly be clearer. Recorded direct to two-track, and produced by Bell, five of the nine cuts were nailed on the first take, indicative of the kind of magical spontaneity that only comes from listening at the highest level.

“A sophisticated rhythmic sensibility and a refined sense of dynamics. An improvisational shapeshifter.”—DownBeat ★★★★

“It's hard to imagine a more synergistic gathering of virtuosity, freedom and the sheer joy of musical conversation."—Bird Magazine

“One cannot help but be very intrigued by Lori's technical and improvisational ease. She is a remarkable flautist.”—Jazz Improv Magazine