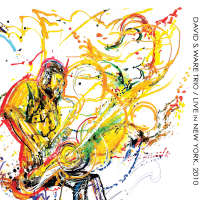 slideshow
Live in New York, 2010 presents a tremendous one-night engagement by saxophone colossus David S. Ware and his latter day Trio in an intimate club setting – at Blue Note on October 4, 2010. This double- album features the complete night of music – one set per CD. Featuring his perennially steadfast musical partner William Parker on bass, and likewise incomparable Warren Smith on drums, they were celebrating the recent release of the studio album, Onecept. Having played an electrifying set at Vision Festival in June, this extended night in October was the third and final magnificent time on which this trio convened.

Appearances at jazz clubs in New York were rare for Ware. The two hour+ sets, with repast in-between, allowed him and group to inhabit the space; afforded more time to stretch out and breathe with the music. As Ware was exclusively dealing with spontaneous forms during this period in his creative life, the six extended suites here were newly created on that night. None of these fantastic multi-track recordings have been previously released.

The other highly distinctive aspect of this performance was Ware’s use of his Beuscher straight alto saxophone, or stritch, which features on four of the six suites. While pieces featuring this instrument appear on three albums recorded & released in the last years before his passing, this recording is by a great measure the most extensive documentation that exists of David S. Ware on alto. Further to his absolute command & control, he brought forth Middle & Far Eastern sonorities on the instrument, which served his modus operandi of music as a transcendental experience very well indeed. The final compositions of each set here feature him on his trademark tenor sax, upon which he earned–and then some–his status as a saxophone colossus.

This is the extraordinary third edition in the David S. Ware Archive Series, a series launched by AUM Fidelity to help ensure that the light of Ware's singularly powerful vision continues to radiate. This release was preceded by Birth of a Being (Expanded) and the Live in Sant’Anna Arresi, 2004 duo with Matthew Shipp ]. This set is manna for those who are already fans of his work, and a bountifully potent entry point for new converts.