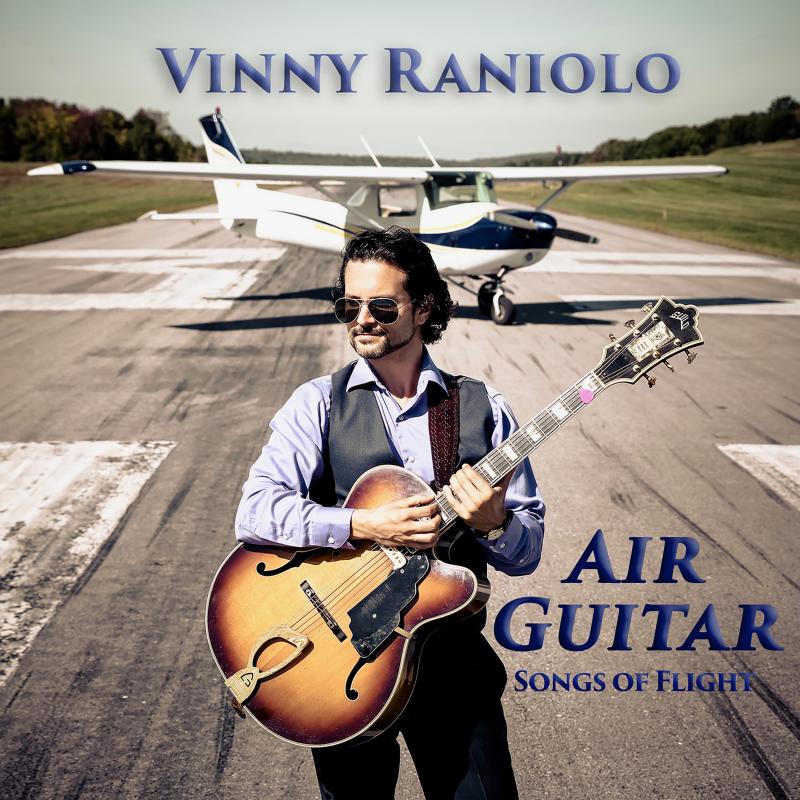 slideshow
Virtuoso guitarist Vinny Raniolo has built a widespread global fan base, thanks to his engaging approach to early jazz, his regular appearances on PBS specials, and his collaborations with six-string giants including Bucky Pizzarelli, Frank Vignola and Tommy Emmanuel.

Vinny’s love of flying is just about on par with his devotion to music, and with the release of his brand-new CD, Air Guitar, the 6-string wizard and pilot has found a way to connect his two passions.

Air Guitar, Raniolo’s much-anticipated debut recording as a leader, features a cache of 15 classic tunes related to flying and the wild blue yonder, by composers ranging from Benny Goodman to John Denver. The selections travel from the birth of aviation (the 1910 rarity “Come Josephine in My Flying Machine”), through gypsy jazz (into the clouds with Django Reinhardt’s “Nuages”) to the easy swing of Jimmy Van Heusen (“Come Fly With Me”). Raniolo also delves into the Great American Songbook with classic tunes by Cole Porter, Irving Berlin, Hoagy Carmichael, and more.

Though Air Guitar is Vinny’s first album as a leader, he’s far from a newcomer to jazz. The Nassau County guitarist got interested in jazz at age 16 after a teacher introduced him to to records by masters of jazz guitar such as Joe Pass, John Pizzarelli, Bucky Pizzarelli, Herb Ellis and others. Vinny fell in love with the music immediately and realized, “That’s what I want to do.” He began gigging as a teen, and his career really took off when he paired up with fellow guitarist Frank Vignola at age 22.

Since then, Vinny Raniolo has garnered widespread attention and praise from critics and fans alike for his playing with Four Generations of Guitar, Rhythm Future Quartet and other ensembles. He maintains a busy international touring schedule, and appears on numerous albums, including duos with Vignola, and as a sideman and a sought-out accompanist for singers. Vinny is also recognized as an educator and is the author of several instruction books.

As for his other obsession, Vinny grew up around pilots, flight instructors and planes, but the flying bug didn’t bite till recently. He was hooked from his first lesson, about three years ago; now the brilliant guitarist is also an instrument-rated pilot, currently working toward obtaining a commercial license.

The flying guitarist’s passions are more closely connected than they might seem. “My background in music definitely helps with my overall understanding. It’s learning another language, and there are a lot of crossover skills such as coordination and math,” Vinny points out. “ I think that in life we are always playing jazz: You are alert to the environment around you and quickly improvise based on your knowledge of the situation. Just like music, aviation is a lifelong study and takes a lot of dedication.”

The choice of concert venue is as special and as personal as the music: Audience members will have a chance to view a full exhibition of aviation history during a pre-concert cocktail hour, with hors d’œuvres, plus a cash bar.

Bassist Elias Bailey, an in-demand player who has performed and studied with many of the top names in jazz, joins Vinny on Air Guitar, and onstage at the Reckson Center at the Cradle of Aviation Museum concert, as they celebrate the release of the new CD.

This special event takes place at the Reckson Center at the Cradle of Aviation Museum in Garden City, Long Island, April 27, 7 p.m. to 11 p.m.