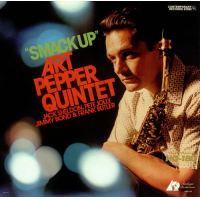 slideshow
Right after recording Smack Up in October 1960, Art Pepper took the cash from the session and went to a friend's house to buy two condoms of heroin. What he didn't know when he exited is that the residence was under surveillance and that he was on the detectives' list of regular buyers.

Busted, Pepper, a repeat offender, was held in the local jail before being sent to San Quentin. When he was released in 1964, it was as if he had missed 50 years of his musical life. The entire jazz scene had changed. The Hollywood studios he left behind were now occupied by Phil Spector, the Beach Boys and dozens of other pop-rock money machines. As for the cool jazz of Smack Up, it was out and the free jazz of John Coltrane and Ornette Coleman was the cutting edge. Pepper had some catching up to do.

Pepper tried to make up for lost time. “It happened slowly, but by 1964, when I got out of San Quentin and started playing again, more and more I found myself sounding like Coltrane," said Pepper in Straight Life: The Story of Art Pepper by Pepper and his wife Laurie. “Never copied any of his licks consciously, but from my ear and my feeling and my sense of music. I went into Shelly's Manne Hole with a group, and a lot of people liked what I did and really thought I was playing modern, and a lot of others asked what had happened to the old Art Pepper." Months after his release, Pepper appeared on Jazz Casual, a local San Francisco TV show hosted by Ralph Gleason, with Frank Strazzeri on piano, Fred Marshall on bass and Bill Goodwin on drums. Fortunately, the show's tape has surfaced on YouTube and we get to hear Pepper blow free jazz and speak to Gleason about his new approach...