SOURCE: JAZZWAX BY MARC MYERS
May 3, 2018
Sign in to view read count 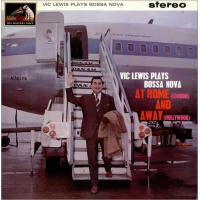 One of my favorite little-known bossa nova albums was recorded by a British big-band leader born in 1919. Inconceivable, but true. Vic Lewis Plays Bossa Nova at Home and Away was recorded in Los Angeles in January 1963 and in London for EMI in February as an RCA-EMI joint venture. The L.A. tracks were done with top Hollywood jazz artists while the balance was recorded with British jazz musicians. Many of the players in both cities had recorded with Lewis before.

All of the songs are gentle and lyrical, allowing soloists to shine. Interestingly, the material on both sides of the LP don't have distinct London or L.A. sounds. Instead, they have a common feel, which was probably Lewis's doing while overseeing the project. Vic Lewis was an interesting cat. He recorded quite a few albums that were exquisite and swinging. For more on Lewis, see my 2009 post here.