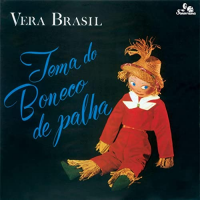 After witnessing yesterday's horrifying ransacking and disgraceful occupation of our nation's Capitol building, you deserve a treat. First, my apologies for the destabilizing and demoralizing actions of an unhinged mob of Americans who paralyzed our nation's government seemingly unopposed by security forces. Many in our country have succumbed to information poisoning, mental confusion and denial on top of a deadly pandemic and economic hardship. To help you ease the stress, I want to introduce you to what I listened to yesterday.

Despite owning upward of 300 bossa nova albums, I was unfamiliar with this one. I only know about it because Todd Selbert kindly sent the vinyl to me. Recorded on June 3, 1964 in São Paulo, Brazil, the album by singer Véra Brasil was originally entitled Tema do Boneco De Palha, or Ode to a Straw Puppet, and released in the U.S. by Revelation in 1975. The music and Brasil's vocals on the record are as soothing as they are beautiful.

Véra Brasil was born in São Paulo into a family of musicians. Her father was Sivan Castelo Neto, a songwriter, poet and composer. Brasil began as a composer in 1954 but her songs didn't catch on immediately. Brazilian singer Leny Eversong was first to record three of her compositions. Not until the '60s did Brasil begin performing in public. Eversong encouraged her to take singing lessons so she could record her own songs. In 1964, Brasil recorded Tema do Boneco De Palha and began touring. The album is exquisite.

Here's the personnel: Brasil (vcl, g), Francesco Celano and Silvio Oliani (tp), Jose Cunha, Jorge Toni (bassoon), Roberto de Azevedo (b), Direu Medeiros (d) and Luiz de Andrade (fl, cl, bass cl, cavaquinho, bandolim and arr). But Brasil's recording career was strangely limited. As far as I can tell, this was her only album. Which will come as a shock to you as well when you hear it, since her voice and songs are exceptional. Brighter days are ahead.