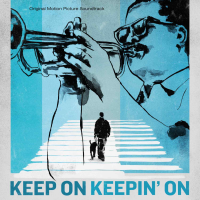 slideshow
Co-Produced by Quincy Jones, The Album Features Performances By Clark Terry (With Duke Ellington, The Count Basie Orchestra, Jazz at the Philharmonic All-Stars) and Justin Kauflin With Original Score by Justin Kauflin and Dave Grusin

“This soundtrack is not only a road map through the film, but also somewhat of a personal Clark Terry mix-tape,” said the film’s director Alan Hicks. “Producing it with Clark’s first student — the great Quincy Jones—has been an honor and an extremely humbling experience, something I will never forget. Keep On Keepin’ On is a project filled with passion and love, and has been my little way of saying thank you to my teacher.”

“I am absolutely honored to be a part of Keep On Keepin’ On,” said Quincy Jones. “Clark Terry was my idol, my teacher, and is still one of my dearest friends. On top of that, he is undoubtedly the greatest trumpet player of the 20th Century, and a living legend. To help share his story and his spirit with the world has been a passion and goal of mine for years, and this film depicts his importance in the lexicon of American music beautifully.”

Shot over the course of five years by first-time filmmaker Al Hicks, Keep On Keepin’ On depicts the remarkable story of 93-year-old jazz legend Clark Terry. A living monument to the Golden Era of Jazz, Terry—a mentor to Miles Davis - is among the few performers ever to have played in both Count Basie's and Duke Ellington's bands. In the 1960's, he broke the color barrier as the first African-American staff musician at NBC (on The Tonight Show). Today, after a life spent working with and teaching the most totemic figures in jazz history, Terry continues to attract and cultivate budding talents. Keep On Keepin’ On highlights his friendship with the preternaturally gifted Justin Kauflin, a blind, 23-year-old piano prodigy who suffers from debilitating stage fright.

Not long after Kauflin is invited to compete in an elite Jazz competition, Terry's health takes a turn for the worse. As the clock ticks, we see two friends confront the toughest challenges of their lives. Kauflin's work on the film's score with composer Dave Grusin sets the tone for a story that spans decades, lifetimes and the entire history of modern Jazz, complete with firsthand anecdotes from Jones and Herbie Hancock. Keep On Keepin’ On is a film crafted with great affection by Hicks - another former student of Terry's - a grace note for his teacher, infused with soulfulness and serendipity.

“I’ve said this many times, but this film has so much TRUTH in it, it’s what hits you on the emotional level,” said Jones. “I cry every time I watch this film, and it’s tears of understanding and feeling for these real, beautiful, people. Justin and Clark have a special relationship that I know well, and I am beyond elated that this, along with the music, can be shared in an exquisite picture. This is a film that will inspire all of us to Keep On Keepin’ On.”

Clark Terry’s career in jazz spans more than seventy years – he is one of the most recorded musicians in the history of jazz – with more than 900 recordings. He is a world-class trumpeter, flugelhornist, educator, composer, writer, trumpet/flugelhorn designer, teacher and NEA Jazz Master. Terry has performed for eight U.S. Presidents, and was a Jazz Ambassador for State Department tours in the Middle East and Africa. More than fifty jazz festivals have featured him at sea and on land on all seven continents.

Terry has been an active teacher. On December 14, 2010, he celebrated his ninetieth birthday, and his students continue to fly from Australia, Israel, Austria, Canada, the United States, and many other locations to Clark’s home for jazz lessons. Clark says, “Teaching jazz allows me to play a part in making dreams come true for aspiring musicians.” Clark has received dozens of other Hall and Wall of Fame Awards, Jazz Master Awards, keys to cities, lifetime achievement awards (four were presented to him in 2010), trophies, plaques and other prestigious awards. The French and Austrian Governments presented him with their esteemed Arts and Letters Awards, and he was knighted in Germany.

Founded in 1978, Varèse Sarabande is the most prolific producer of film music in the world, releasing the highest quality soundtracks from the world’s greatest composers. From current box office hits and top television series to the classics of Hollywood’s Golden Age, Varèse Sarabande’s catalog includes albums from practically every composer in every era, covering all of film history; from Bernard Herrmann, Alex North and Jerry Goldsmith to Alexandre Desplat, Michael Giacchino and Brian Tyler.