SOURCE: ALL ABOUT JAZZ PUBLICITY
August 17, 2009
Sign in to view read count 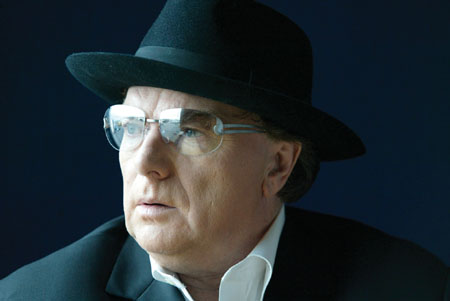 slideshow
What started as a few shows to revisit Van Morrisons 1968 classic Astral Weeks an album hed never previously performed live has blossomed into a much larger celebration of the LP.

First, Morrison turned a November 2008 performance in Los Angeles into the live film/album Astral Weeks: Live at the Hollywood Bowl. Now hes on a full-blown “Astral Weeks" tour that will run at least through this fall, and there are more related releases in the near future: Morrison is so dedicated to his Astral Weeks revival that fans will be able to witness the entire year-long process of rediscovering the record in the forthcoming feature-length documentary To Be Born Again.

The film, slated for an early 2010 release, will draw from live performances, interviews, rehearsals and other behind-the-scenes footage, starting with the first Hollywood Bowl shows last fall. The doc features footage shot exclusively during the past year, and Morrison (whos directing) is looking forward to finally telling his story the way he wants it to be told. The film shows the real Van Morrison, explains Darren Doane, the filmmaker who co-directed the Live at the Hollywood Bowl concert film and will be working alongside Morrison for the documentary. Its his film. And the film is about exposing and tearing down all the myths about Van Morrison and the music industry as a whole.

For Morrison, Astral Weeks an album that sold poorly for years and was neglected by his record company upon its release has stood as a metaphor for his long history of breaking boundaries and pushing artistic limits. It received no promotion from Warner Bros. thats why I never got to play the songs live, he told Rolling Stone last November. Reclaiming the album as his own through thrilling live performances during the past year has been a liberating experience for Morrison, whose recent “Astral Weeks" shows have been some of the most inspired performances of his whole career. Using Astral Weeks as his spiritual and artistic focus, Morrison has been revisiting other similarly overlooked portions from his immense catalog, performing breathtaking versions of rarities Fair Play and Streets of Arklow from the underappreciated 1974 album Veedon Fleece at recent shows in the Northeast.

As for other projects in the works, Morrison is, as always, writing new material but remains focused on his Astral Weeks revival, gearing up for a set of U.S. shows this fall while he puts the finishing touches on To Be Born Again. As Doane explains, the film will be just one more aspect of Van creating. As director of the film, Van Morrison is behind all of the creative decisions for the documentary and the film should unmistakably be a product of Morrisons artistic vision. As Doane puts it, Its another 90-120 minutes of pure Van art.