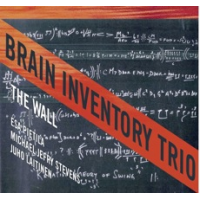 slideshow
The recently formed Brain Inventory Trio not only bridges two cultures but also brings us a fusion of styles from jazz and folk music to rock, throwing all preconceptions out the window. With American pianist Michael Jefry Stevens and two Finns, saxophonist Esa Pietilä and cellist Juho Laitinen, in the line‐up, the trio's talents span across a multitude of musical genres. The upcoming album was recorded at a concert played in Helsinki in 2010.

Both Michael Jefry Stevens and Esa Pietilä are widely known for their avant‐garde improvisation and visionary take on music. The upcoming album, The Wall, finally brings together the two musicians and their original and distinctive styles of freeform jazz. Recorded live, the album's material is fifty percent composed pieces and fifty percent pure collective improvisation.

The unusual instrumentation of piano, cello (both acoustic and electric) and saxophones opens possibilities for new musical expression. The absence of a rhythm section leaves more room for free expression, with Stevens' multi‐faceted style and piano sound merging with the effects of the electric cello to create a massive, almost orchestral sound world.

“The fact that we come from different cultural and musical backgrounds adds just the right amount of friction and tension to our music. For us, it was important to carry the element of surprise and musical risk‐taking of our live performances over to the album. The result is something very unusual that's neither traditional jazz nor freeform, but something in‐ between,” says Pietilä.

With his bold musical vision, improvised solo saxophone concerts and ensembles Esa Pietilä Trio and the “4 Streams" Quartet, Esa Pietilä has cemented his position as a performer on both national and international circuits. He has collaborated with the likes of Mathias Eick, Jeff Siegel, Heiri Kaenzig, Ron McClure, Raoul Björkenheim, Iro Haarla, Anders Bergcrantz, and Mikko Innanen. Pietilä has also given masterclasses on improvisation in a number of countries, including Switzerland, Austria, USA, Denmark, Sweden and Iceland.

Steinway artist Michael Jefry Stevens is a pianist‐composer, who also teaches at the Blue Ridge Community College. Stevens has released over 70 albums featuring his own music and composed a large number of works for various ensembles. His working musical ensembles currently include the following: the Fonda/Stevens Group (USA), the Griffith/Stevens Quartet (Austria/USA), the Eastern Boundary Quartet (Hungary/USA), and the In Transit Quartet (Switzerland). Stevens has performed and/or recorded with Dave Douglas, Michael Rabinowitz, Miles Griffith and Joe Fonda.

Cellist Juho Laitinen is a versatile musician and an active member of the music community. He is a performing artist, curator, teacher and writer. Along with performing as a soloist and a chamber and orchestra musician both in Finland and abroad, Laitinen teaches at Sibelius Academy in Helsinki. He is also the artistic director of the Kallio New Music Days festival and the recital series Tulkinnanvaraista. Laitinen received his initial training at Turku Conservatory and the Royal College of Music in London.