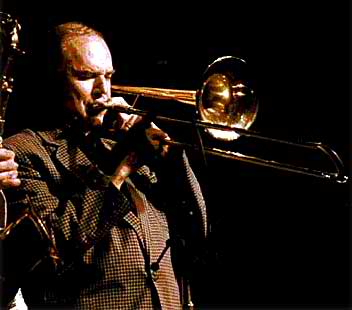 slideshow
Urbie Green is easily one of the smoothest and most lyrical trombonists of the '50s and '60s. He's also among the most prolific. From his days with Gene Krupa in the late 1940s until his last recording in 1997, Green was on an astonishing 603 known jazz recording sessions, according to Tom Lord's Jazz Discography. This doesn't include dates for movie soundtracks or television. By contrast, trombonist Jack Teagarden was on 507 dates and trombonist J.J. Johnson was on 355. Tommy Dorsey? He was on 1,153 dates. One of Green's finest early '60s sessions was The Persuasive Trombone of Urbie Green.

This session was recorded for Command, a label started in 1959 by Enoch Light and George Schwager in Harrison, N.J. The line was marketed to early audiophiles&#151code at the time for guys who liked “bachelor pad" music. Command was big on the exaggerated separation of stereo tracks to create a highly dynamic range. Albums appeared in glossy, high-quality gatefold covers with explosive abstract designs. Interestingly, Command was one of the first companies to use 35MM film for master recordings instead of magnetic tape. The recording band on film held more informationand was superior for improved fidelity.

Persuasive Trombone was the 15th album issued by Command, and the first of many that Urbie recorded for the label in the 1960s. What makes this particular album special is the hip swinging arrangements, the band's knot-tight attack and Green's rich swinging horn. Unfortunately, the back of the original album was devoted to text rattling on about the album's technical data rather than who wrote the arrangements. My best guess would be Ralph Burns on the ballads and Al Cohn on the swingers.

There are plenty of surprises. The first track—At Last—opens with an I Can't Get Started intro but then kicks into a mid-tempo swinger. There's fine piercing solos by trumpeter John Bello on Prisoner of Love, Dream and other tracks. The album ends, interestingly, with a simple and beautiful working by Green of I Can't Get Started.

Throughout his career, Green's appeal rested with his ability to sing beautifully through his trombone. He employed a velvety tone and a breathing technique that erased any evidence of taking a breath. Notes seemed to pour from a pitcher, and Green somehow managed to move effortlessly up and down along the surface of melodies like a cue ball on marble.

This album is sultry and seductive and yet still swings without bringing down the house.