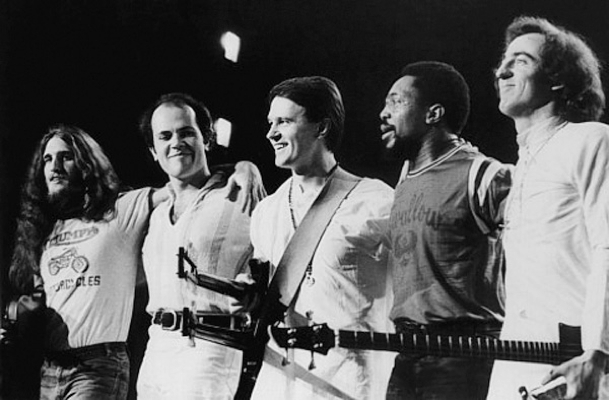 An investigative reporter, doing research for a book about an aspect of the Beatles, has discovered a long-forgotten and very rare professionally produced video performance of the Mahavishnu Orchestra. The video was literally on its way to the trash bin to be lost forever when Paul Larosa eyed it amongst a treasure trove of musical memorabilia that had been in storage at CBS in New York.

LaRosa was not a fan of the trailblazing jazz-rock band of the 1970s, however, he knew a childhood friend who was. LaRosa, a well-known author and television producer who has won two Emmys and many other journalistic awards, entered into an agreement with the heirs of the late New York based attorney Nat Weiss which gave him ownership to a large collection of material of great interest to many music fans and historians. Weiss represented the Beatles in the United States in business matters and also managed many well known artists such as Cat Stevens, James Taylor and the Mahavishnu Orchestra.

The Mahavishnu video was recorded in March of 1973 in Seattle, Washington. It was presented under the auspices of a little known regional Public Broadcasting rock music show known as Tele-Rock. The video has not been seen since and had become lost to history. Once LaRosa obtained physical ownership of the video he gave it to his former classmate Ted McCallion as a gift. McCallion, has long studied the history of the Mahavishnu Orchestra and has been involved in several book projects about the band.

The video is now being exclusively presented at the website of author Walter Kolosky. Kolosky wrote the book Power, Passion and Beauty: The Story of the Legendary Mahavishnu Orchestra.

LaRosa’s detailed story appears at the site as does a rare image which was found near the video.