UArts has one of the premier jazz education programs in the United States. --Hrayr Attarian, All About Jazz 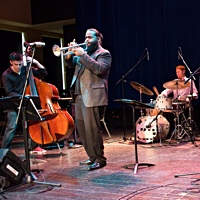 The University of the Arts Graduate Jazz Ensemble will be featured at this year’s Burlington Discover Jazz Festival in Burlington, Vermont. They will present a two-hour set on Sunday, June 4 beginning at 5 PM on City Hall Stage. Admission is free.

Hailed as one of the premier jazz programs in the United States, the University of the Arts, School of Music is currently celebrating 140 years of excellence in music education. Its long list of distinguished alumni include Vincent Persichetti, Andre Watts, Jymie Merritt, Kenny Barron, Stanley Clarke, Lew Tabackin, Trudy Pitts, Robin Eubanks and many others.

An integral part of Philadelphia’s vibrant music scene and rich jazz history, the school features over thirty ensembles, including the celebrated “Z” BIG BAND and Graduate Jazz Ensemble. “Z” Big Band won first place for large ensemble in the DOWNBEAT 2016 Student Music Awards. They will perform at the 2017 Monterey Jazz Festival. The Graduate Jazz Ensemble has released two critically acclaimed CD recordings, Like No One Else and Mars Apes. In 2015 they presented Brownie Speaks at Newport, a pre-festival concert celebration of Clifford Brown’s 1955 appearance at the Newport Jazz Festival. Members of the group are among the most active performers in Philadelphia area jazz clubs and concert venues. Sunday's performance will be their first appearance at the Burlington Discover Jazz Festival.

The Burlington Discover Jazz Festival runs from June 2-11 and will include: Terence Blanchard, Diana Krall, Jane Bunnett, Trombone Shorty, Kamasi Washington, Peter Brötzmann and many others. Check out the full line up at discoverjazz.com.