SOURCE: SOMETHING ELSE!
April 2, 2010
Sign in to view read count 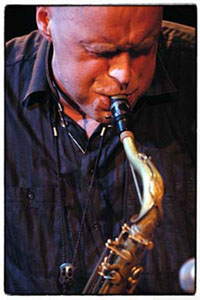 German woodwind wunderkind Gebhard Ullmann and New York-based trombone titlist Steve Swell may come from opposing sides of the Atlantic, but when the two get together to make music, they're in the same house of whack jazz. There are some 70 led or co-led albums between the two (including Swell's mind melting Particle Data Group with Gregg Bendian and Bruce Eisenbeil). Together, they make a highly charged quartet that adds Hilliard Greene on double bass and Barry Altschul on drums.

Altschul is a free jazz giant, having played in Paul Bley's group in the 60's, 70's and 80's, and serving as the rhythmic anchor for that early 70's free jazz supergroup Circle (Chick Corea, Dave Holland, Anthony Braxton). Greene himself has been the choice bass player for a number of great leaders in the last twenty years, having recorded with Charles Gayle, Dave Douglas and Eisenbeil, among others. Combine these two with that front line (with Ullmann playing tenor sax and bass clarinet), and the result is something that can be legitimately called a free jazz supergroup, too.

Last month, Ullmann and Swell issued their second album as the co-operative The Ullmann|Swell 4, called by the campy title News? No News!. The album's moniker is only a hint of the seemingly irreverent attitude of this quartet. It's often care-free but never careless. There's a highly defined tonal frame at the core of each song, and around that frame the players converse intensely with each other, making it a true cooperative. No, it's not no noodling session, but four simultaneous streams of conscienceness flowing in the same direction.

“More Hello" is a hell of a greeting. The well-defined head is a blast of horns, and Altschul employs both power and tonal touches to virtually encircle Ullmann and Swell with a percussional curtain without overwhelming them. Greene gets to play along some spidery path, but not before Ullmann and Swell play urgent solos that are atonal but don't lose sight of the thematic background. The song races at breakneck speed to its 5:19 length never veering off course.

The U|S 4 don't need for their songs to be explosive to have well defined characters. In “New York," the head involves the two principals revving up their horns together as if they were turning the ignition to get the car started. “Composite #1" alternately fills up the song's container full of sounds until it's overflowing, only to pour it all out and start again with space and little else. “Kleine Figuren #2" casts a dark mood; it's a good place to find all sorts of subtleties with which Altschul decorates the somber noise.

“Planet Hopping On A Thursday Afternoon" is actually not all that dissonant by their standards, but the melody stated by Greene runs at double the time as the one played by Ullmann and Swell. Ullmann and then Swell give terse, meaningful solos, feeding off the vibe from the rhythm section's locked-down beat. On “GPS #1" Ullmann, Swell and Greene---with and without bow---emit creepy noises from their instruments before Altschul coaxes them into a building thunder. For the title cut, Ullmann's bass clarinet is followed closely on the theme by Swell, eventually leading to a breakdown of all harmony and timekeeping, until the thematic lines reappear to reassert order.

Following the relatively brief, fragmented “GPS #2," the group tackles “Berlin 9:35," where their terrific group dynamics and interaction between the co-leaders make this reason enough to listen and connect with this song. The ten-minute “Airtight" closes out the album. Greene and Altschul create a sophisticated groove upon which the horn players blaze a compelling harmonic trail, and then improvise on top of it as Altschul splinters off into several directions at once.

In the the CD's liner notes, the renowned improvised music bassist William Parker writes “The goal in these sonic excursions is to explore music in all of its moods, color and shapes. There is also a strong investment in silence, space and texture." Parker is bang-on in his assessment; and with the forthright execution of their craft, The Ullmann|Swell 4 backs up the bass master's words with equally prescient music.