Ubiquity/Cubop to Release "The Best of Bobby Matos"

SOURCE: ALL ABOUT JAZZ PUBLICITY
July 30, 2007
Sign in to view read count 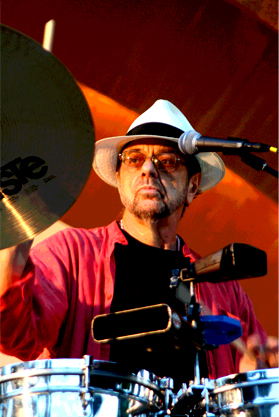 Favorite selections from his Cubop releases, plus previously unreleased material (including a re-invented “My Latin Soul"), and some of his collaborations are featured on this overdue Best Of. Guest musicians include Jerry Gonzalez, John Santos, Dave Pike, and Jack Costanzo.

Bronx born Bobby Matos made his percussive musical debut beating on pots and pans in his Grandma's apartment before going to backstage informal lessons with conga drum masters Patato Valdez and Mongo Santamaria. His first gigs were in the early 1960's in bohemian Greenwich Village Cafes amongst the beatniks. Matos soon found himself playing in every type of venue; from Bronx dance halls to Carnegie Hall, elegant supper clubs, Central Park Concerts, Off Broadway theaters, and after hours clubs in El Barrio.

Encouraged to play timbales by Willie Bobo and Tito Puente he attended the New School and Manhattan School of Music in the late 1960s, studying composition and arranging. Latin Music was red hot in New York at the time and an inspired Matos recorded “My Latin Soul" for Philips Records. This album is a much prized cult classic perennially high on many collector wants lists, DJ sets, and has been inspiration for musicians and music fans alike.

After touring and recording with artists like Ben Vereen, Bette Midler, Fred Neil, Jim Croce, Ray Rivera, Joe Loco, and Miriam Makeeba, Matos relocated to Los Angeles where he began experimenting with an Afro Cuban Jazz band. Blending and bending musical elements from modern and modal jazz with the rich legacy of Afro Cuban music. Taking these ideas into the studio Matos recorded several albums in the 1980s and 1990s, most notably five critically acclaimed CDs for Cubop, the Latin Jazz/Afro Cuban arm of Ubiquity Records.

“The release of my first Cubop record totally changed the perception of me as a cult artist and helped bring my music to a much wider audience," explains Matos. “In addition to recording my own music, it also gave me the opportunity to produce such great artists as Jack Costanzo, Pucho and the Latin Soul Brothers, and Ray Armando," he says.